Manchester City: Why Now Is the Time for Pep Guardiola to Give Youngsters a Chance

​The time has come for Manchester City to put their faith in youth.

A 3-2 defeat to Norwich City on Saturday exposed some serious weaknesses in the Sky Blues' armour, with Nicolas Otamendi particularly at fault after causing numerous problems in the backline.

It is not overly-critical to say the Argentine was horrendous at Carrow Road and he simply must pay the price. That doesn't mean Pep Guardiola needs to send the centre back into exile, but the coach definitely needs to assess alternatives.

18-year-old defender Eric Garcia has been playing above his age-grade for much of his career in the academy. T

Nine years in ​Barcelona's famous La Masia taught him how to control possession and choose the correct option under pressure, both of which are essential for succeeding in a side managed by Guardiola.

In 2018/19, Garcia posted a passing accuracy of 92% from the 21 games he featured in with the youth and senior teams. Additionally, he made an average of 8.98 passes into the opponents final third, finding the intended target 74% of the time. By the sounds of it, the teenager has the potential to offer much of what Ayermic Laporte does. Incisive, purposeful passing is what makes the latter invaluable to his coach and the brand of football he employs.

Garcia's talents are not restricted to just offensive play, however. His interception statistics - the starlet makes nearly five each match - are equally impressive, whilst he has likewise shown himself to be an intelligent footballer through his strong positional sense.

Add his organisational skills and leadership qualities to that and you have a marvellous centre-back in the making. His experience with the captaincy and calm head is precisely what Pep needs as ​City threaten to collapse (relatively speaking). Of course, the Catalan is far from the sole youngster pushing for a chance in Guardiola's lineups. Phil Foden has to be given an extended run of games or there will be issues come next summer.

David Silva is off at the close of the current campaign and Ilkay Gundogan just is not capable of playing in the manner El Mago does. That's no slight on the German, he's simply a different kind of footballer.

However, Foden is so blatantly the rightful heir to the playmaker's throne. Silky operators with the skill to unlock the tightest of defences, he and Silva are cast in the same mould.

The veteran's imminent departure means his protege must be handed the reigns for a while. Failure to do so will deprive the Manchester-native of precious minutes on the pitch at a crucial stage in his development.

If Foden isn't getting regular game-time in the next eight months, Silva's exit will be far more damaging than it needs to be; the 19-year-old won't be at the level required to make up for his elder's absence.

Moreover, Silva has hardly been firing on all cylinders over the course of 2019. Numerous sub-par performances have been put in, his gradual decline clear for all to see.

That may sound harsh to say of such a wonderful servant for the club, but it's only the truth. He's passed his best and a successor is ready and waiting. Let Foden ease the weight on his weary shoulders.

The fans have been calling out for a homegrown hero and it's clear who that is, if only Pep would give the player he famously called 'the best he's ever seen' the opportunity to shine. 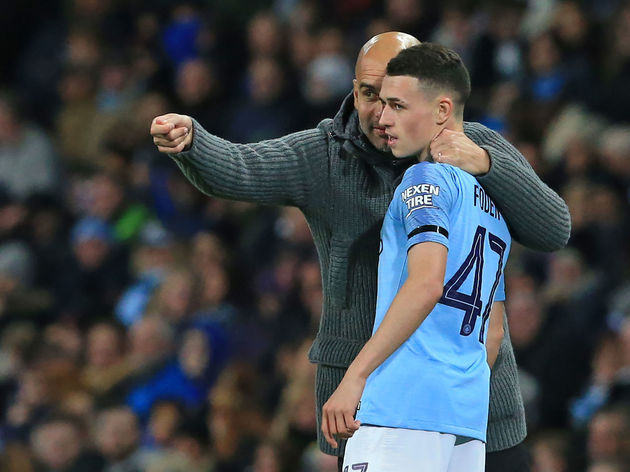 What happened when the City boss refused to grant Jadon Sancho entry into the first-team? The wunderkind decided to move on to ​Borussia Dortmund and swiftly showed Guardiola why he was wrong to keep him in the academy.

You can win things with the right kids and these kids are quite possibly the right ones. But there's only one way to find out for sure.

Frank Lampard's Chelsea have (via an assist from FIFA) shown how being forced to rely on the kids in a time of need isn't always a bad thing.

For Pep, his young charges can solve several conundrums facing City right now. Just maybe they can also help prevent the ​Premier League title slipping out of their club's grasp.