​How? How is it possible for so many good footballers to just look completely clueless time and time again? If you're looking for an answer to that question, take a glance over to the Emirates Stadium.

Arsenal's entire season has just been one comedy of errors after another, and their frailties were on full show once again as they threw away a two-goal lead to draw with Watford. The thing is, that 2-2 scoreline was actually pretty flattering to the Gunners, who conceded 31 shots during the game.

Their insistence on playing out from the back saw them absolutely butcher a short goal-kick and allow Tom Cleverley to snatch a goal back, and then David Luiz happened. 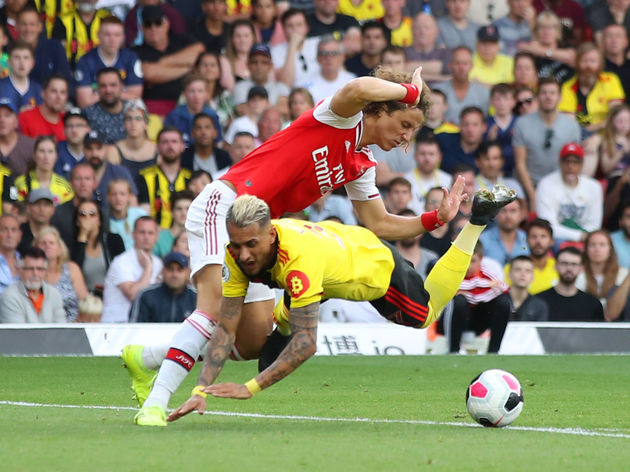 The Brazilian inexplicably decided to fling a leg at Roberto Pereyra and conceded a penalty which saw them drop two points. He has made a career out of inexplicably doing things, so why ​Arsenal ever thought he would be their saviour is anyone's guess.

Do you look at the recruitment department for answers? They clearly had plenty of money to work with, but decided to spend incredibly heavily on Nicolas Pepe, despite already having a pretty exciting attack to begin with.

​Pierre-Emerick Aubameyang and ​Alexandre Lacazette have been prolific in the ​Premier League, so that money should have been spent in defence. Opta noted that the Gunners have made 14 errors which have led to goals since the start of last season, and no other ​Premier League side has made more.

Today’s result is not good for us. I feel responsible for this result, so I would like to apologise to all of you. I don’t like to hide, and I will keep working hard in order to achieve our goals. pic.twitter.com/to7IOViTcS

They needed an elite centre-back even before Laurent Koscielny pushed for an exit, but they just decided not to bother looking. ​Luiz

However, the criticism cannot be solely focused on the defenders. Manager Unai Emery needs to stand up and take the blame as well.

His tactics saw Arsenal make error after error last season, and things haven't changed this time around. There's an obvious flaw to Emery's love of playing out from the back, but he seems to be oblivious to it all. An obvious comparison would be Antonio Conte's ​Chelsea in the 2016/17 season. The Blues were hopeless defensively and looked like a mid-table side at best, so Conte changed formation and eventually stormed to the league title.

Whether Emery has the personnel to do so or not is irrelevant. As a top manager, he needs to be open-minded and prepared to change, and he simply isn't. He wants Arsenal to play his style of football, despite them clearly not being up to it.

How many mistakes do Arsenal need to make before he changes? Their weaknesses saw them miss out on the top four last season, and there's a real chance of that happening again if they don't come up with a new plan, which might involve sacking the manager. Not only will it cost them in the league, but it could see them lose some of their top players. Aubameyang and Lacazette are two of the finest strikers around, but why would they want to play for a team who seem determined to avoid success?

Aubameyang has already ​spoken about his frustrations. The doubt is already there. If the future means anything to Arsenal, something needs to be done now.