​Pep Guardiola sarcastically congratulated Liverpool on winning this year's Premier League title, in response to a journalist's question, after Manchester City slipped to a shock 3-2 defeat at Norwich City. But the Catalan boss was keen to stress that the 2019/20 season is still young.

The Citizens found themselves two goals down inside half an hour, and the Canaries went on to clinch a dramatic win, thanks to some appalling defending by the away side.

Am I the only one amazed that City didn't move Otamendi on and replace him during the summer?

After the defeat, Guardiola spoke honestly about the title race and his side's performance, but, as reported by ​Metro and ​The Guardian, the ex-Barcelona coach was keen to praise a Norwich side which defied all the odds against the Premier League champions.

Here's the best of what he said post-match.

Pep Guardiola on the Title Race

"We’ve dropped five points. ​Tottenham, we played incredible well. Today, in the important parts we have to know exactly what to do. 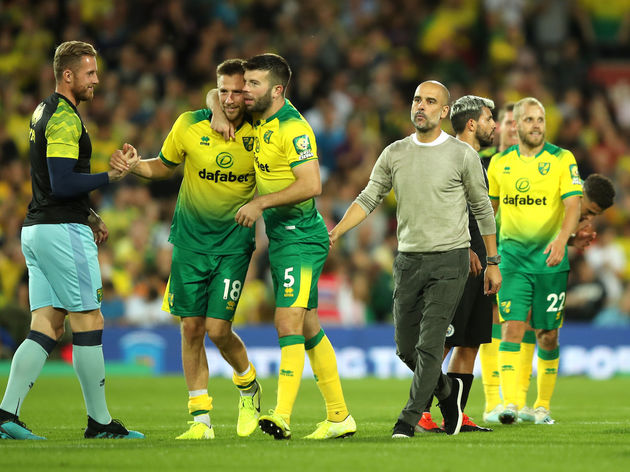 “Five points [behind Liverpool] is five points but we are in September. What are we supposed to do? Say: ‘It’s September and congratulations to ​Liverpool you are champions’? Not for one second am I going to doubt my players.”

"Our passing was not bad. We created chances but we could not score them today.

"We did not have urgency in the final third that we normally have. In football you can’t always avoid mistakes. ‘I don’t know how many shots we had or how many they had, but football is about goals and about what you do in the boxes.’"

“Nico doesn’t really know someone is coming and nobody tells him.

All our players need to be respected, imagine trying to abuse your own player through social media. pic.twitter.com/xU7R55AyUn

“Sometimes you know we make mistakes. I think sometimes we forget these guys are human. Football is quick, things can go wrong and I must see what I can do to help them." “We knew the quality of Norwich because they destroyed the Championship last season. They have the confidence to play. In some moments we didn’t play quite well. We had chances to equalise in the game but in the end congratulations to them.”

Guardiola is keeping cool for now, but ​Man City are already playing catch up and Liverpool will take some stopping.