Inter 1-0 Udinese: Report, Ratings & Reaction as I Nerazzurri Hold Out for Tense Win at San Siro

Inter continued their winning start to the new Serie A campaign

Udinese forward Rodrigo De Paul received a first-half red card, when he needlessly slapped Inter winger Antonio Candreva across the face, leaving the referee no choice but to dismiss the Argentine star.

Nerazzurri midfielder Stefano Sensi punished the away side soon after with a superb header, darting into the box and latching onto a Diego Godin cross. 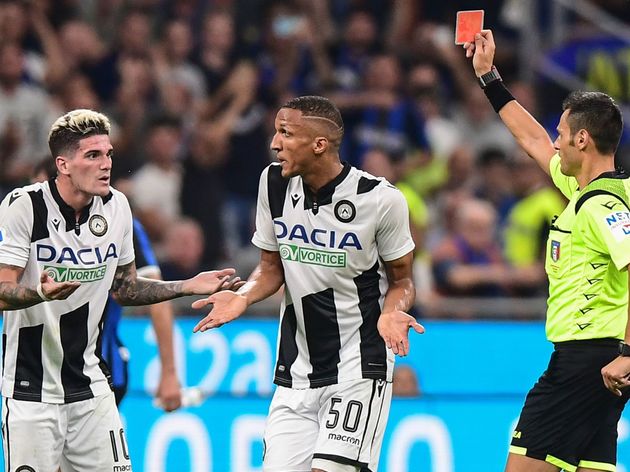 Udinese struggled to create many clear-cut opportunities, Kevin Lasagna firing a rare chance wide of goal when he shrugged Godin off the ball. Conte's side were comfortable throughout and will be disappointed not to have added to their tally in the second half.

The San Siro was treated to their first glimpse of ​Alexis Sanchez in a blue and black shirt against Udinese, coming on as a 78th minute substitute.

The Chilean forward arrived on loan from ​Manchester United, and after a difficult spell at the Premier League club, the footballing world was curious about how he will perform in a new environment.

The former Udinese man looked lively upon his arrival, and desperate to make a contribution on his Inter debut. Sanchez certainly has a lot to prove after his wretched spell in Manchester, and he'll be keen to show what he's capable of during his second spell in Italy.

absolute revelation in the Inter midfield. His performances have earned him a place in Roberto Mancini's Italy side, and he continues to go from strength to strength. Sensi's game has improved significantly under Conte, and he is becoming a perfect box-to-box midfielder, adding goals to his already impressive game. The 24-year-old controlled the match from the midfield, and gave Udinese little chance of sparking a comeback at the San Siro.

Not much competition for this section tonight. Udinese were under pressure, but coping nicely until De Paul's moment of madness midway through the first half. The Argentine star let all of his teammates and supporters down with a needless slap across Candreva's face.

Rodrigo De Paul with early contender for stupidest red card of the year, Antonio Candreva to be nominated for Best Supporting Actor at next Oscars for his role in it

A clear rush of blood to the head cost his side tonight, but Candreva's overreaction was equally as blood-boiling. His extravagant collapse to the floor and cry in pain contributed to De Paul's departure, but the Udinese forward can blame no one but himself.

STAR MAN - Seko Fofana was an absolute powerhouse in the heart of the Udinese midfield, and the Ivory Coast international can consider himself very unfortunate to be on the losing side on Saturday evening. The Udinese man chased down every ball and broke up so many Inter attacks, as I Nerazzurri tried to put the match to bed. Fofana covered the ground which De Paul's dismissal left, and he provided a calm head in possession for I Friulani.

Inter begin their Champions League adventure on Tuesday evening when they host Slavia Prague, before taking on rivals AC Milan in the highly anticipated 'Derby di Milano' on Saturday evening.

Udinese will be keen to get back to winning ways when they entertain newly-promoted side Brescia on Saturday afternoon.