​Norwich City were in stupendous form as they beat Manchester City 3-2 on Saturday evening for their second win of the campaign.

The Premier League new-boys stunned the champions when Kenny McLean powered a near-post header into the top corner, though questions will be asked of Ederson's reactions and positioning. Sergio Aguero came close to a leveller as he nodded over when stretching to meet a deep cross, yet it was the ​Canaries who grabbed the game's second as a devastating counterattack was rounded off by Todd Cantwell.

Jolted into action by another Norwich goal, the ​Citizens went upfield and struck the post through the Raheem Sterling before their Argentine marksman popped up between two defenders to flick home.

Guardiola saw his side make an atrocious start to the second half as Teemu Pukki capitalised on wayward defending to smash in and reestablish his team's two-goal advantage. City were looking toothless as Norwich kept them at bay for large periods, though Rodri's long-range rifle on 87-minutes gave the visitors hope of a late revival. It mattered little, as Daniel Farke's warriors held out to the final whistle.

The brand of football Norwich bring to the ​Premier League is not too dissimilar to that seen in ​Bournemouth. Both clubs are open and attacking, rather than fearing their opponents. 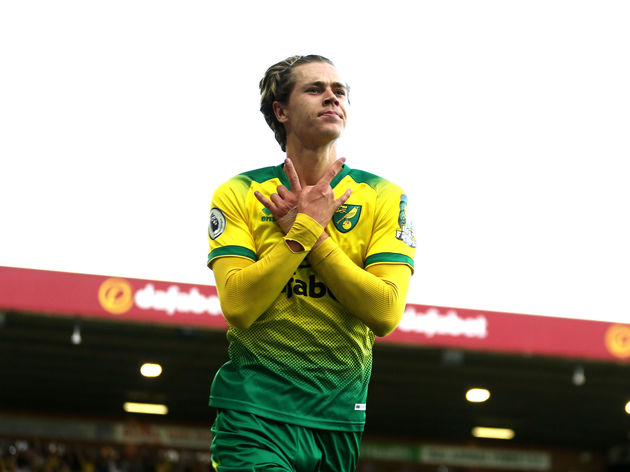 The Cherries have enjoyed success as a result and it wouldn't be surprising to see the same at Carrow Road. Farke's recruits look more than capable of keeping their heads above water.

The Canaries' talisman was magical against the treble winners. Pukki was a lethal weapon that City couldn't handle. His intelligent runs and smart interplay causing Nicolas Otamendi countless problems. 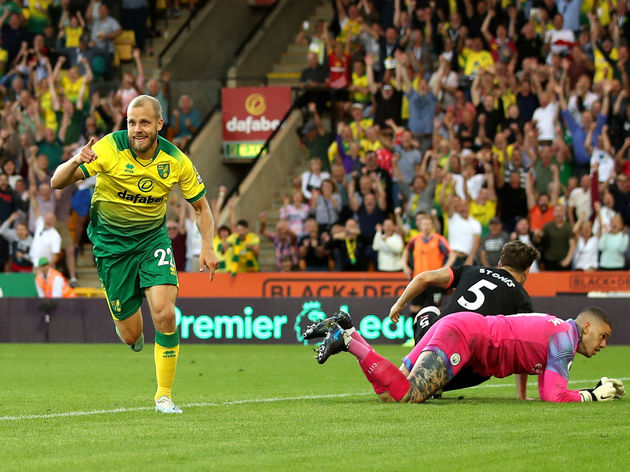 He's been the surprise star of this campaign, with the Fin collecting a goal and an assist on Saturday to take his overall tallies to six and two, respectively. How many can this man get?

It's looking like it'll be a big haul this season for the 29-year-old, who has shown he can profit against the top clubs, as well as those in the lower half of the table. Pukki is class, Pukki is permanent.

ON THE BALL CITY.

No Aymeric Laporte, no stability at the back.

City have lost their defensive leader for several months and the clash with Norwich proved just how damaging his absence could be.

The Canaries are renowned for their free-flowing, attacking style of play and they looked threatening against a shaky Sky Blues backline. All credit to the hosts, but their opponents were there for the taking. Without Laporte, Guardiola's defence are vulnerable and Saturday's display will have their rivals believing they, too, can punish the Citizens. Will the Frenchman's spell out see his side slip out of the title race?

Rodri distributed nicely throughout the game and he is starting to enjoy life in the Premier League on a personal level, even if the team had an off-day.

Unfortunately for him, there wasn't much competition for standout player in the City side. Perhaps it's merely a hangover from the international window, perhaps it's complacency. Or another alternative: Norwich were immense.

Man City fall 5 points behind Liverpool after 5 games. But Pep is fine pic.twitter.com/Tc2Q3LU5LF

City take on Shakhtar Donetsk this Wednesday as European competition restarts, with a league match versus Watford at the Etihad Stadium to follow on Saturday.

The Canaries play ​Burnley and ​Crystal Palace in the next two rounds, both of which take place on a Saturday.