​Manchester United beat Leicester City 1-0 at Old Trafford as they recorded their first victory since the opening day of the Premier League season.

The Red Devils helped alleviate the pressure on coach Ole Gunnar Solskjaer with Marcus Rashford converting an early penalty after he was brought down by Harry Maguire's replacement, Caglar Soyuncu.

Despite the setback, ​Leicester gradually wrestled control from ​United and nearly drew level through Ben Chilwell's wicked, dipping volley, but David de Gea was well-positioned to tip it over.

More half-chances fell the way of the Midlands outfit as the contest wore on, yet neither Demarai Gray nor James Maddison could find the target with efforts from the edge of the box.

The final half an hour was dominated by the Foxes, who probed and pressed for a leveller that never came. A lack of imagination and composure cost them on multiple occasions as United held onto to a vital win.

It wasn't vintage United - you'll have to wait a while before anything on that level - but they got the job done and are back to winning ways.

More important than the performance was the result and the Red Devils secured the win they and their manager so desperately needed. Victory means Solskjaer's position as head coach is safe for now and that will no doubt benefit the players, too. Stability is essential for growth and they know the gaffer will be around for a little while longer.

Industrious and an ever-willing runner, Scott McTominay showed the kind of heart that has been missing for so long at Old Trafford. If all of United's players had've been as committed as he and Rashford have been at the start of this campaign, Solskjaer would surely be facing less questions about his suitability for the job.

McTominay continues to grow in his role as an all-action midfielder, with showing such as this proving his coaches were right to put their faith in the 22-year-old.

Marcus Rashford has now scored more goals vs. Leicester (4) than any other team in his career.

Manchester United have been awarded 40% of the 10 penalties given in the Premier League so far this season.

Leicester are seen by many as this season's dark horses, the team that can break the Big Six or even the top four. Their sluggish display on Saturday suggests that is still just a pipe dream.

United away is never going to be an easy fixture, regardless of their troubles in recent years. Nevertheless, Brendan Rodgers' men should have put their hosts to the sword as they began to dominate proceedings in the north-west. Failure to do so may mean they lack the self-belief to mix it with the best. Do they really have faith they can rock up to stadiums like Old Trafford and leave with all three points?

If the Foxes did, they would have secured the victory on Saturday, but they instead showed too much respect to Man Utd and were deservedly punished.

There aren't many candidates from Leicester for the Man of the Match gong, though their right-back was a solid outlet down the flank. 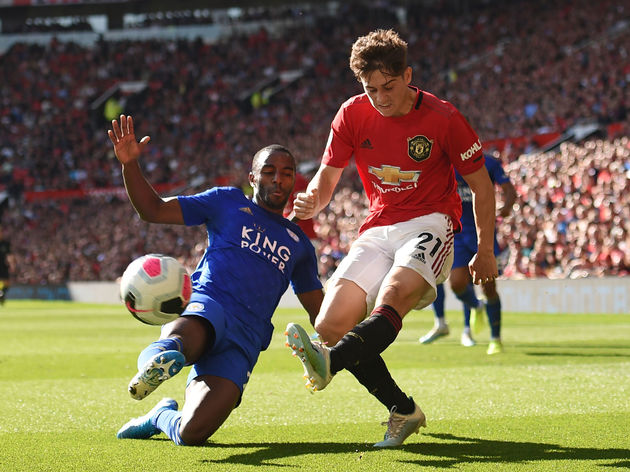 Regularly taking up good positions, Ricardo Pereira was a thorn in United's side as he bombed up and down the touchline, finding opportunities to deliver the ball into the box.

Aside from the Portuguese, few of the Foxes lineup can be pleased with their display, with fellow fullback Chilwell one of a handful to do themselves justice at the Theatre of Dreams.

Soyuncu, the man they reckon is better than Maguire, with a rash challenge on Rashford

Leicester fans booing Harry Maguire’s early touches of the ball after a few renditions of their new song ‘F**k off Maguire.’ #mufc

United are in Europa League action on Thursday as they welcome Kazakhstani side Astana, with a Premier League match at ​West Ham United to follow on Sunday.

Meanwhile, Leicester will lock horns with ​Tottenham Hotspur at the King Power Stadium a day before the Red Devils take on the Hammers.