The fixture was hotly contested from the kick-off and some brilliant end-to-end football from both sides got the fans riled up in the first half. Der BVB opened the scoring via Paco Alcacer who continues his red hot form following a superb cross from Achraf Hakimi. Marco Reus scored Dortmund's second straight after the start of the second half thanks to great work from Jadon Sancho and Alcacer. Raphael Guerreiro and Reus managed to seal a late third and fourth goal as Dortmund put the match beyond doubt.

With either Bayern or Leipzig set to drop points, it was hugely important that Dortmund managed to seal the three points.

Once again Lucien Favre's side displayed some brilliant attacking play with fluid link-up play and a great volume of chance creation the staples of their play. Alcacer, Reus and Sancho were instrumental in making Favre's attacking philosophy work today as they so often have been.

Leverkusen's defence were unable to stop the free-flowing football that Die Schwarzgelben were playing and were helpless for all of the goals. With that being said, the ​Dortmund attack has always been their strong point but there is still room for improvement in defence. 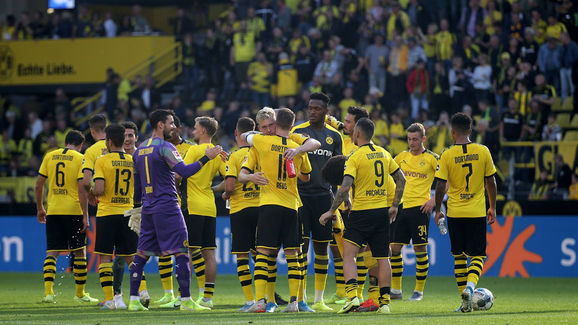 Peter Bosz's side were able to carve up many opportunities but were extremely wasteful in front of goal as they took advantage of the huge gaps in defence. Against better opposition, Dortmund could be looking at a different result. All in all, it was a very good performance and one that Favre will be relieved with after their loss to Union Berlin.

STAR PLAYER - There were several great performances in the Dortmund squad but captain Marco Reus was the standout player. His two goals were more than enough for Dortmund to seal three points in an important fixture.

The captain has been on red hot form since he has been the crucial cog for the side and today was no different. His overall link-up play and finishing were superb as per usual but his creativity and dribbling were a joy to watch.

The German's brilliant positioning in front of goal helped Die Borussen seal a crucial second goal to put the fixture beyond doubt. He has been exceptional in Dortmund colours recently and has stayed an integral part of Favre's squad despite his previous injury troubles.

Marco Reus 2 Goals + Jadon Sancho 2 Assists vs. Leverkusen. Hands down one of the best attacking duos in world football at the moment.

Leverkusen have gifted young attackers in their side with Kai Havertz the star and it was evident to see their talent. However, despite creating a lot of opportunities, experienced players such as Bellarabi and Volland were extremely wasteful missing guilt edged chances as well as being unable to make the final ball.

Manager Peter Bosz will be disappointed to see that his side didn't put Dortmund to the sword especially considering that the game was very open before Alcacer's opener. They pressed on to find a goal in the second half with the introduction of Leon Bailey instigating a lot of the offence. 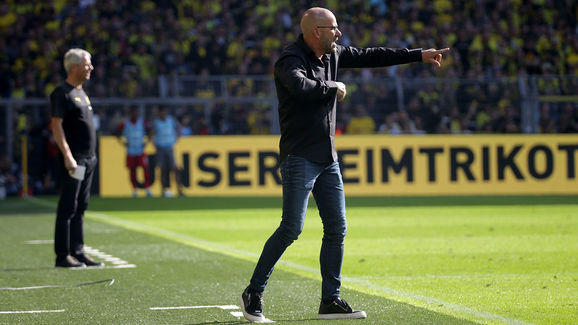 However, Die Werkselfcould not find that much-needed goal mostly due to Dortmund's compact defensive scheme. Leon Bailey was a bright spark and it begs the question of why Bosz started the woeful Bellarabi ahead of him. This match proves that both Leverkusen and Bosz still have a lot to learn and improve on.

When the score was level, he made two outstanding back-to-back stops from Reus and former Leverkusen midfielder Julian Brandt. He was not at fault for any of the goals as the defence let him down today.

The Finnish's performance was far from enough as Leverkusen were trounced despite a decent outing from the shot-stopper.

Without Lukas Hradecky this game would already be over.
Sadly not enough intencity in this #Leverkusen side to successfully execute their game plan.

Me watching Hradecky making those saves on Marco: pic.twitter.com/y6E8eHfsfi

Hradecky out of his mind

Borussia Dortmund needed that win to put pressure on rivals ​Bayern Munich and RB Leipzig as the title race starts to heat up, and they got it. They have put down a marker to show they can win the ​Bundesliga ahead of their rivals.

Die Schwarzgelben next face a tough Eintracht Frankfurt in what will be a hotly contested affair and the result could have a detrimental effect for either team come to the end of the season.

Leverkusen welcome Union Berlin and will look to bounce back in a match where the will hope to take three points.