The Reds were slow to start and it was the visitors who broke the deadlock through loanee Jetro Willems, with the Dutchman getting some space on the edge of the box and firing a shot into the top corner with his weaker right foot.

Mané then put Liverpool in front with the easiest goal of his career, benefiting from a mistake from Newcastle

Georginio Wijnaldum and Andrew Robertson both came close to scoring a crucial third for Liverpool after the break, but Mohamed Salah eventually grabbed a goal to extend their lead and kill off any chance of a fightback from the visitors.

Mané had the ball in the back of the net once again but it was rightly chalked off for offside, with Liverpool then settling on their two-goal lead and seeing out the remainder of the match with comfort.

If Liverpool could have picked when they were going to concede against Newcastle United, then the chances are that they'd have chosen to go one goal behind in the opening six minutes.

But it wasn't conceding early that saw the crowd at Anfield turn a little sour throughout the opening 25 minutes, but rather Liverpool's slow start to the lunchtime kick-off left an awful lot to be desired. 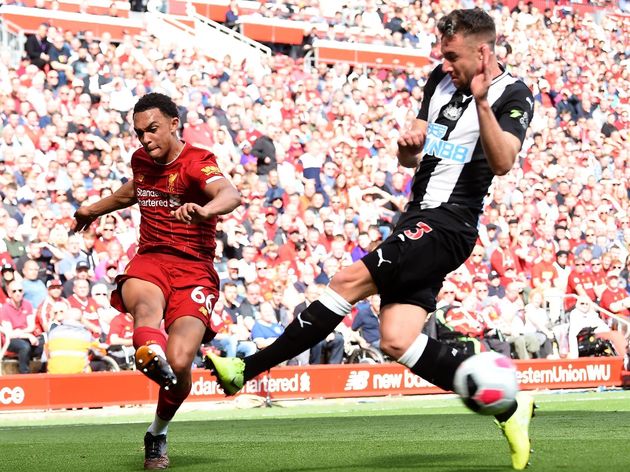 Mané's equaliser was vital to turning things around, but not just because it brought Liverpool back on level terms with Newcastle.

It gave the home fans an injection which saw them once again take up their place as Liverpool's 12th man, but most importantly it gave his teammates a much-needed kick up the backside to take control of the game and pick up another win.

Mohamed Salah might have the mantle as Liverpool's best or most important player, but

50 - Sadio Mané has played 50 Premier League matches at Anfield without losing – 49 with Liverpool, one with Southampton (W40 D10 L0) - more than any other player has played on a ground without ending on the losing side in Premier League history. Charm. pic.twitter.com/iNqsuQukcw

Sadio Mane is the African footballer of the year. If they announce anyone else as winner, it’d mean the award means nothing!

Sadio Mane will be a lot happier today. So too will be people with acca’s.

Steve Bruce's side went to Anfield with a clear plan of replicating their performance against Tottenham, and for the most part, Newcastle were able to do just that, but ultimately it was the difference in quality between their opposition which decided the final result on Saturday. Travelling fans did at least have a moment to cheer when Jetro Willems opened his account for the club with a stunning opening goal, but it quickly became apparent that Newcastle were out of their depth against the European champions.

Although the signs at the start of the season were that the Magpies would be fighting the drop this season, they showed enough at Anfield (as they have all season) that retaining their status in the Premier League is far from just being a pipe dream.

Far from being Newcastle's best player just because he scored a wonder goal, Jetro Willams put in one of his best performances over the last 12 months as a wing-back at Anfield.

Whatever happens in this game... that Jetro Willems strike 朗#NUFC

Take a bow @JetroWillems_15 son! What a strike! #NUFC

Liverpool's dangerous right side were kept quiet for almost the entirety of the match, something which fellow summer signing

Liverpool break from Premier League action as they look to defend their Champions League crown, kicking off the group stages on the road to S.S.C. Napoli before travelling to Stamford Bridge next week.

Steve Bruce's Newcastle will look to get another three points on the board when they host Brighton & Hove Albion next week, but then face trips to Leicester and Chelsea either side of a match against Manchester United at St. James' Park.