​Manchester City centre back Aymeric Laporte could be out until February and his teammates could be out of the title race as a result.

Liverpool are just two points ahead of Pep Guardiola's men after four rounds of Premier League action, but even that may prove pivotal given their record last term. The Reds lost only one game in 2019/20 as they racked up 97 points - though that obviously wasn't enough to dethrone City, who collected 98. 2018/19 showed us that the Merseysiders and the ​Sky Blues are far and away the best sides in England, with both capable of building up enormous winning streaks.

Neither club blinked in the final nine matches of the season as they went all out for the title and an early slip up this time around, in this race of the finest margins, could be decisive. Without Laporte, City may find themselves with an unbridgeable gap to make up.

A ​serious knee injury versus Burnley at the end of September means Guardiola has now lost both of the central defenders who were so important in the run-in last year.

Club stalwart and inspirational captain Vincent Kompany called time on his Citizens career in the summer, the Belgian returning to boyhood team Anderlecht in his home country. Their partnership was crucial to the club's tally of 14 straight league victories from early February to the final day in May, without which they would have finished as runners-up.

Numerous fixtures were won by a slender margin and the Laporte-Kompany combination ensured the defence stayed strong when the going got tough, as it did in 1-0 triumphs over ​Bournemouth, ​Leicester City and ​West Ham United.

The calmness and composure the duo brought to the backline made sure there were no blips when opponents started to probe and cause problems. That assured presence is now gone.

Nicolas Otamendi and John Stones - or even one of those two plus Fernandinho - is not a central defence that fills supporters with confidence. It looks vulnerable, error-prone and liable to collapse. Even if it's just one loss that they're at fault for, it would mean three points have gone begging and ​Liverpool's lead has been ever so slightly stretched. Playing catch up with the rampant Reds is not a good place to be in.

However, it's not merely in defence where Laporte's absence will be felt. The Frenchman's ball-playing abilities are essential to the brand of football Guardiola demands from his squad.

Adept at long-range passes to teammates in space, he has added a new dimension to the way City operate on the pitch. The likes of Raheem Sterling know they can be found in almost any area of the field, which stretches the opposition and allows more room for the midfield.

Stones is a fine passer of the ball, but he does not have the accuracy from distance that his counterpart possesses. Otamendi certainly doesn't and that is a very real issue for the coach. 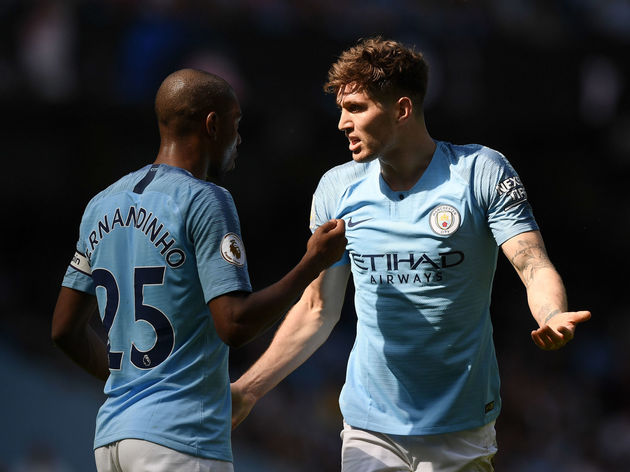 Comfortable wins will be harder to come by as the Citizens adjust to life without Laporte, the side missing a whole host of qualities he provides.

If matches aren't comfortable then stress levels go up and mistakes become increasingly common. When that happens, those banana skins are much harder to avoid and points start to get dropped.

By the time Laporte returns, Liverpool may be out of sight. Jurgen Klopp will have learned from last season and you can bet the Reds won't let another healthy advantage slip. The title race would effectively be over.