Leandro Trossard: Why the Belgian Is Key to Brighton's Premier League Survival Hopes

Brighton fans will be, shall we say, not best pleased with the international break that's just passed.

Yet to make his first international cap, summer signing Leandro Trossard injured his groin while training with Belgium, and is expected to be out of action for at least a month.

Having loaned out both Jurgen Locadia and Florin Andone, manager Graham Potter is now thin on attacking options - with Trossard's absence a bitter blow given how he's started his Seagulls career. Deploying a 3-4-3 formation in all four fixtures, recent recruit Neal Maupay looks set to battle it out with veteran Glenn Murray for the number nine role, with the other two spots up for grabs between Pascal Groß, the underwhelming Alireza Jahanbakhsh and Solly March, who was preferred as a wing-back in the opening three matches.

However, it's not just the limited forward options that makes Trossard so important to ​Brighton this season - he genuinely looks a very good player.

A wide forward, Trossard demonstrated his eye for goal throughout his time in Belgium for Genk, scoring 34 goals in 103 league games - a highly respectable return.

The 24-year-old proved he could take his domestic form into European competition too, bagging three in six matches in last season's Europa League, prompting Brighton to pay approaching £18m for his services - next to nothing in today's transfer climate. Having been benched in Brighton's season opener against ​Watford due to the need to acclimatise to English football, Trossard made an immediate impact on his debut against ​West Ham. First, scoring a precise volley that was ruled out by VAR, before equalising with an arrowed finish from outside the box.

Having had to play with ten men the following week versus ​Southampton thanks to Andone's straight red card, followed by an away test at the Etihad, Brighton haven't scored a goal since - but Trossard's stats nonetheless look promising.

Per game, the winger has had more shots (2.7), more key passes (2.3) and more dribbles (2) than any other player in the Seagulls' squad, evidence of his all-round ability as somebody who can get shots off at goal, create chances for his teammates and beat opponents in one-on-one duels. 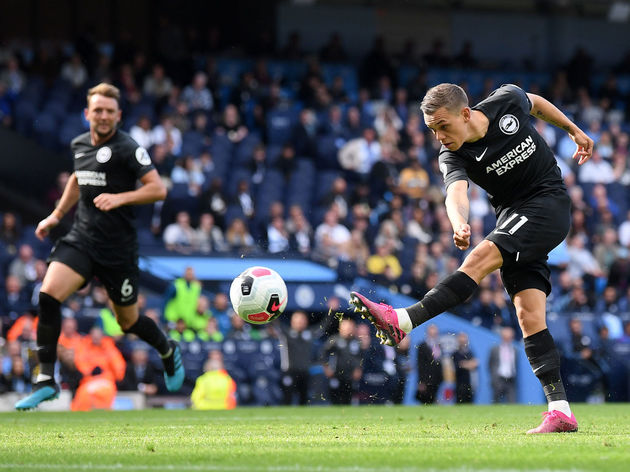 In fact, albeit within a small sample size, Trossard's 2.3 key passes per game ranks him within the top ten in the Premier League, just below the likes of ​Sadio Mane and ​Riyad Mahrez. Rather than be a master of one trade, however, Trossard is simply very good at all, an attacking threat via different avenues.

This is backed up even further by a delve into the Belgian's underlying statistics. When measuring his expected goals and expected assists combined per 90 - with a minimum of 250 minutes played - Trossard ranks seventh in the league, excluding centre forwards.

This leaves him behind only Premier League heavyweights ​Kevin De Bruyne, Raheem Sterling, David Silva, ​Mohamed Salah and Mane, as well as Todd Cantwell of ​Norwich, who has also started the season in superb form. He will be a huge loss for Brighton, therefore, who have (on paper, at least) winnable games against ​Burnley and Newcastle, before tough tests versus ​Chelsea and Spurs. Groß will have to handle the creative burden, feeding Maupay with chances in open play and delivering expert set pieces for Brighton's commanding centre backs to head home.

Throughout the remainder of the season, however, expect to see and hear much of Trossard, a player who is set to become a well-known name by the end of it.