​Liverpool host Newcastle at Anfield on Saturday, for what (on paper) should be another routine win for the Reds. However, this fixture has produced some of the wildest, most high-scoring, high-octane entertainment in the Premier League's history and nothing can be taken for granted.

Both giants of the Premier League, this fixture remains a classic encounter for the football purist.

Here are six examples of memorable games between the Reds and the Magpies. There's surely only one place to start.

With Newcastle in the midst of a title battle with ​Manchester United, Liverpool helped out their old rivals by beating the Kevin Keegan's entertainers in what is often held up as the greatest Premier League game ever.

Having taken an early lead through Robbie Fowler, ​Liverpool were pegged back to 2-1 within 14 minutes by Les Ferdinand and David Ginola. Fowler equalised, followed by a Faustino Asprilla finish, before Stan Collymore had the final say, first equalising and then striking a last-minute winner at the death. This time, Liverpool took a 3-0 lead into half-time, with goals from Steve McManaman, Patrick Berger and Fowler giving the hosts a commanding lead, before ​Newcastle pulled it back through Keith Gillespie, Asprilla and Warren Barton.

However, as he often did in the mid-90s, Fowler stamped his authority on the final result, winning the game for Liverpool in the dying moments. 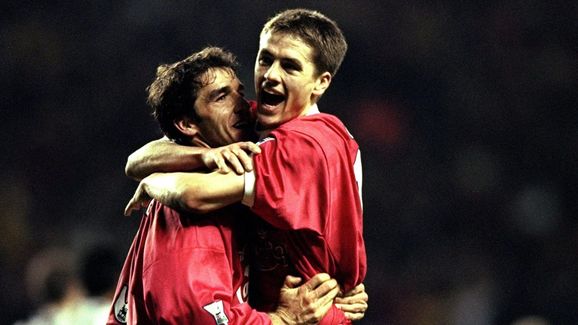 Ruud Gullit's first game in charge of Newcastle was overshadowed by 18-year-old Michael Owen, who was in the form of his young life, having starred for England at that summer's World Cup.

Owen helped himself to a first-half hat-trick, with the win cemented by Berger with Liverpool's fourth of the afternoon. ​ 2-0 up in the 80th minute at Anfield courtesy of Dietmar Hamann and an Owen penalty, Liverpool looked to be cruising to a comfortable victory.

Newcastle persisted nevertheless. The late Gary Speed pulled one back for the Magpies before Alan Shearer powered home a last-minute header to earn his side a well-deserved point. Having recently replaced the well-liked Chris Hughton, Alan Pardew needed to win over the Toon Army, which a 3-1 win over Liverpool certainly achieved (at least temporarily).

Dirk Kuyt's deflected effort cancelled out Kevin Nolan's early goal, before Joey Barton and Andy Carroll - who would join the Reds a month later - secured the three points for the hosts. Having lost 3-0 to fierce rivals Sunderland in their previous game at St. James' Park, relegation-threatened Newcastle desperately needed something against Brendan Rodgers' Liverpool side.

Instead, they were humiliated. Liverpool took a 2-0 lead into half-time through Daniel Agger and boyhood Sunderland fan and ex-player ​Jordan Henderson, and continued to embarrass their opponent in the second period.

January signing Daniel Sturridge bagged a brace before future Sunderland forward Fabio Borini scored a rare goal for the Reds. Henderson then wrapped up proceedings after Mathieu Debuchy was sent off.