​tipped to consider signing a midfielder

Both Ander Herrera and Marouane Fellaini have left since last January without being replaced. And while there is an element of making room for home-grown players like Scott McTominay and Andreas Pereira to develop, United would benefit from adding extra quality, especially with Nemanja Matic increasingly out of place in the new-look project.

January markets are never easy to navigate, particularly for a club the size of United, as fees can often be inflated, while the shortened time frame makes major deals difficult to complete.

Certainly, United won’t be rushing into anything after the Alexis Sanchez deal from January 2018 quickly turned sour and caused far more issues than the Chilean’s own poor form.

There won’t be any shortage of fans on social media demanding that the club goes after Bruno Fernandes. But the Portuguese international is a player United looked at and passed on during the summer and are unlikely to revisit unless there are exceptional circumstances. United decided against paying Newcastle’s vast £50m asking price for relatively unproven 21-year-old Sean Longstaff over the summer. That valuation won’t come down in January and, if anything, is even likely to increase at the mid-point of the season.

Longstaff seems to be the player that United really do want, though, and further enquiries as a minimum can never be ruled out. Another half-season under his belt could even help convince those at Old Trafford he is worth shelling out for, given his lack of experience thus far.

The crazy rumours surrounding United and a £90m bid Declan Rice that emerged this week were the result of a tabloid unashamedly spinning conjecture from 1990s former Leeds and Coventry player Noel Whelan into a sensationalised transfer scoop.

That being said, as a young England international with enormous future potential and room to develop, Rice does fit the profile that United are looking for.

However, like Longstaff, his valuation in January is going to be sky high as West Ham will steadfastly refuse to sell for anything less than a huge fee. Now that Whelan has pulled £90m out of the air, the Hammers have a number that’s out in public they can point to.

Rice only signed his latest West Ham contract last December and it runs until 2024. 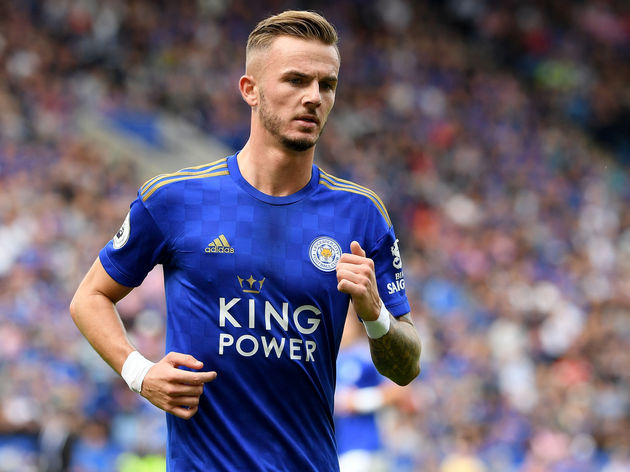 James Maddison is a very different type of player to the more defensive Longstaff and Rice, but the Leicester man fits the same category in terms of age, nationality and future potential.

The 22-year-old is seen as one of the brightest young midfielders in Europe and has impressed so far this season after an impressive breakout campaign in 2018/19, to the point where he earned a senior England call-up for this month’s internationals.

Maddison is another that will come with a huge price tag, while United know only too well that Leicester won’t be talked into accepting less than a premium rate after eventually agreeing to pay £80m for Harry Maguire in August.

There is nothing to stop enquiries and superficial talks, but as with the others, this may have to be a slower burner that picks up pace next summer, rather than in January. It isn’t likely because it doesn’t fit with the overall squad building policy, but if United find themselves simply needing more midfield depth and a shot in the arm come January, a short-term fix may be very necessary to tide them over until the end of the season.

Blaise Matuidi has been linked with United for years and could be the perfect January acquisition if those are the circumstances the club finds itself in.

The tireless 32-year-old is one of the reasons Paul Pogba excels at international level for France and will be entering the final six months of his Juventus contract. Something like an initial 18-month deal at Old Trafford could well prove to be a stroke of genius.

However, the issue may come if United, who have made very deliberate changes to their recruitment policy in recent months, don’t want to be seen ditching that already.

United emerged with serious interest in Tottenham playmaker Christian Eriksen in the final week of the Premier League summer window, with the Dane a player thought to have long been admired by Solskjaer, a fellow Scandinavian.

United only pulled the plug because it was felt that Eriksen was angling for a move to Spain and was not fully committed to the idea of moving to Old Trafford. But, having been denied a move in summer when Real Madrid didn’t make an approach, it is possible that could change.

By January, Eriksen would only have six months left on his contract and Spurs would have to consider selling, potentially at a reduced price, to avoid losing him as a free agent.

However, United would still have to be aware of the competition. Real haven’t really expressed serious interest, yet a potential free transfer next summer may bring them in, while Juventus have been linked and are well known for signing high profile midfielders at the end of a contract.

Eriksen is certainly more affordable than any of the young English players who could be considered. He is also proven at the highest level, and at 27 years of age is perhaps not quite as ‘short-term’ as people might initially think.