8 of the Most Controversial Celebrations in Football History

​On 12 September 2009, Emmanuel Adebayor wrote himself into Premier League folklore with one of the most hilarious/despicable (delete as appropriate) celebrations ever witnessed in the division since its 1992 inception.

For Gooners the world over, he is now seen as the devil incarnate. Leaving north London in the summer for Manchester City hardly helped his reputation amongst the supporter base, but running 100 yards up the pitch to perform a knee slide in front of them destroyed it like flimsy piece of patio furniture thrown in disgust.

Emmanuel Adebayor ran the length of the Etihad pitch to celebrate a vital Man City goal in front of the fuming Arsenal fans 😡 pic.twitter.com/n025qM9GNw

Having signed for the ​Sky Blues in a deal worth £25m, Adebayor scored on his first appearance against Arsene Wenger's side as his new team earned a 4-2 victory. Naturally, he charged the length of the pitch to share the joy with ​Arsenal fans in the away end, who were less than pleased with his actions. In the Togo international's defence, he had been subjected to particularly personal abuse throughout the game.

Speaking years later on the controversial celebration, Adebayor ​said: "Being abused, we got our limit...When I was running emotions took over and all that's in my head is 'yes, today I'm free'.

"It was a moment I will never forget in my life."

To toast that memorable moment, here's a look at eight other particularly controversial celebrations from down the years.

Gazza and the Dentist Chair In the build-up to Euro 1996, a bunch of the England boys went on a morale-building trip to Hong Kong and it clearly helped team spirit...Sorry, helped the team to drink spirits.

The touring party were lambasted by the media after it was learned they'd had a fair few drinks during the trip to the Far East. Of particular interest was an incident involving Paul Gascoigne and a dentist chair.

The midfielder's teammates strapped him in and took him for a ride, pouring copious amounts of alcohol down his throat.

In classic Gazza fashion, he recreated the moment following a mesmerising effort against Scotland in the tournament group stages.

That Luis Suarez celebration against Everton is still one of my favourites  #LFC pic.twitter.com/xo1JEFxAJ7 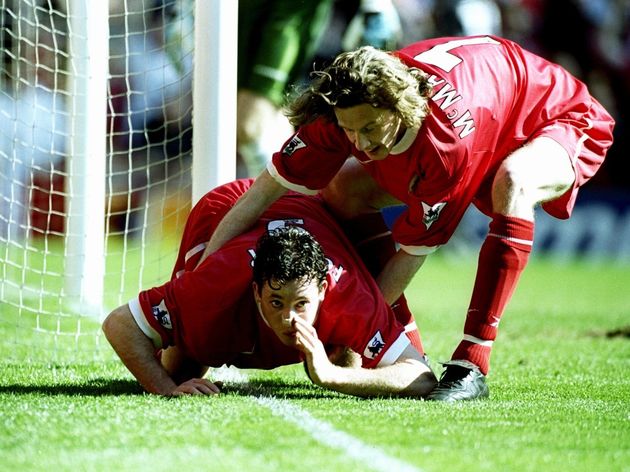 24 years ago to the day Diego Maradona scored against Greece. This is how he celebrated. Just Say No, kids. pic.twitter.com/0Pp52U5rnX

TV cameras got an unattractive view of Maradona, who's wild, bloodshot eyes glared straight down the lens.

Predictably, a drugs test was in order and the veteran superstar got an F, testing positive for the performance-enhancer ephedrine.

Simply LoveLeh Brotherhood (SLB), with his hand making the shape of its logo.

FIFA and UEFA rules mean players aren't allowed to display sponsors’ logos at the finals of a major tournament.

An £80,000 fine and a one-match ban was handed to the Arsenal legend, a pretty harsh punishment given the light-hearted nature of the gesture. Most managers want their own fans to feel like they are an important and valued part of the club. Not Mick McCarthy. Oh no. He tells them to f**k off.

The Ipswich Town faithful mercilessly criticised their coach's tactics and style of play during his tenure at Portman Road, the Irishman responding in a less than dignified manner.

His men took the lead versus fierce rivals ​Norwich City, McCarthy defiantly pumping his fist before shouting some choice words at the crowd.