While Marcus Rashford and Jadon Sancho continue to stake their claims for starts in attack, the major battle is at the heart of the England defence, with a number of defenders hoping they’ll be the one to start alongside permanent fixture Harry Maguire in next summer’s 2020 European Championships.

Here's a look at the seven candidates who are all desperate to convince manager Gareth Southgate that they should be the man to start next to Manchester United defender Maguire for England. 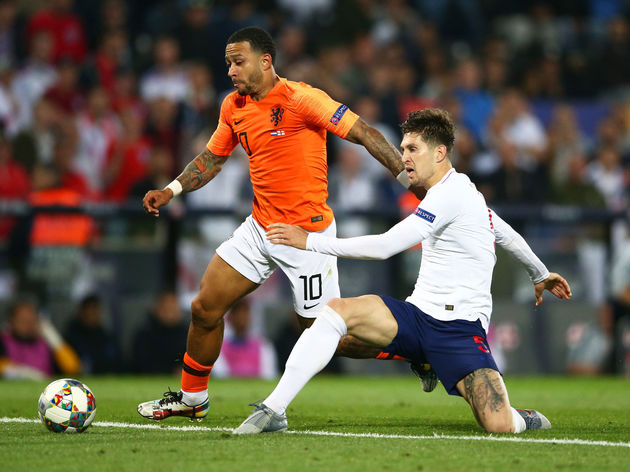 The Manchester City centre half missed the recent games against Bulgaria and Kosovo due to injury but with 38 caps is by far the most experienced defender on this list. He played in all seven of England’s World Cup games in 2018 and even netted two goals in the 6-1 victory over Panama.

However, his terrible mistake against the Netherlands in the UEFA Nations League semi final in June, which led the Dutch going 2-1 up in extra time, resulted in Stones being dropped by Southgate for the third placed playoff match against Switzerland.

His current injury means he is not playing for Manchester City at the moment and he now faces a real battle to get back into the England starting eleven. Southgate handed the Everton defender his eighth and ninth caps this week by starting the 26-year-old in both qualifying games against Bulgaria and Kosovo.

Although Michael Keane was reasonably solid alongside Maguire against Bulgaria, he had a bit of a ​nightmare on Tuesday night at St Mary’s, gifting Kosovo the lead with a dreadful misplaced pass inside the first 36 seconds.

His assist for Raheem Sterling’s leveller should have eased his nerves, but he looked all at sea next to Maguire in the second half as Kosovo notched a further two times.

Question marks certainly remain over his current place in the side. Another man who was in the recent squad is ​Liverpool defender Joe Gomez. However, the 22-year-old, who has seven caps, did not feature in either game with Keane preferred at the back.

Gomez missed out on the 2018 World Cup squad due to injury and has earned just one cap so far in 2019.

If he can stay fit and play regularly alongside the world’s best defender in Virgil van Dijk for the Reds this season, he could well be the man to partner Maguire next summer. Tarkowski was favoured by Southgate in England squads in 2018 and the start of 2019, with the Burnley defender picking up two caps during that time.

He's been left out of the last two squads, and there is a belief his chance may have passed him by. The Brighton defender's consistent performances in the Premier League earned him a call-up last Autumn for the games against Spain and Croatia in the UEFA Nations League group stage.

Whilst he did not feature then, he did make his England debut a month later in November against the United States at Wembley in a 3-0 victory.

However, he'll have to seriously impress Southgate this season if he wants to go to next summer’s European Championships as he hasn't played for England since, with Southgate assessing other options. One of those other options is Tyrone Mings, the only man on the list so far without an England cap.

However, his impressive performances for Aston Villa both last season in the ​Championship and this year in the Premier League earned the 26-year-old a call-up to the senior side for the recent fixtures.

Even though he didn't feature in those games, he is currently ahead of Dunk and Tarkowski in the pecking order and Keane’s dismal performance on Tuesday means his chance is surely around the corner.

Interestingly, the former Bournemouth defender is the only centre back who is left footed out of all Southgate’s options, which could well work to his advantage. Ben Godfrey is more of an obscure candidate, but the England Under-21 international’s performances for Norwich City over the last year mean he is deserving of a mention.

He captained the Under-21 side recently against Kosovo in a game the England youngsters won 2-0, which Southgate will be aware of.

If he can continue to play well at the back for Norwich this season in the Premier League, he could make next summer’s squad. You just never know.