Why England's New 'Golden Generation' are Set Up for Glorious Failure

During a chaotic match on Tuesday evening, England demonstrated why they should, but ultimately won't, win Euro 2020. Southgate's men put five past a creaking Kosovo, but still conceded three sloppy goals in their Group A qualifying match, which set alarm bells ringing at the final whistle.

It was a night in which we truly saw the breathtaking best and woeful worst of England, and although the devastating front three pencilled themselves into the manager's starting XI, question marks remain around a number of defensive frailties.

The Three Lions mauled their opponents during an exhilarating first half, which saw the attacking trident of Raheem Sterling, Harry Kane and Jadon Sancho team up to score five wonderfully worked goals. It was 45 minutes which convinced even the most grounded of us to dream of Euro 2020 glory.

This front 3 is winning the Euro’s and the World Cup and the Nations League 女女女 all of them compliment each other brilliantly. Sterling best of the lot

The movement, link-up play and awareness of each other's positioning was something supporters could have only dreamed of years ago, and the understanding between the forwards drew comparisons to Liverpool's awesome attacking trio.

The first-half attacking display was so good, that ​Michael Keane's appalling mistake in the opening minute seemed like a fading dream. The ​Everton centre-back received the ball under pressure, and rather than turning to his goalkeeper or clearing the danger into the stands, Keane played a horrendous pass across his own penalty area, which was collected and duly punished by Valon Berisha.

Cue the second half, and that fragile backline was breached once again. Declan Rice played a horribly misplaced pass to the opposition, and after pulling the England defence from pillar to post, Berisha finally stroked the ball home. 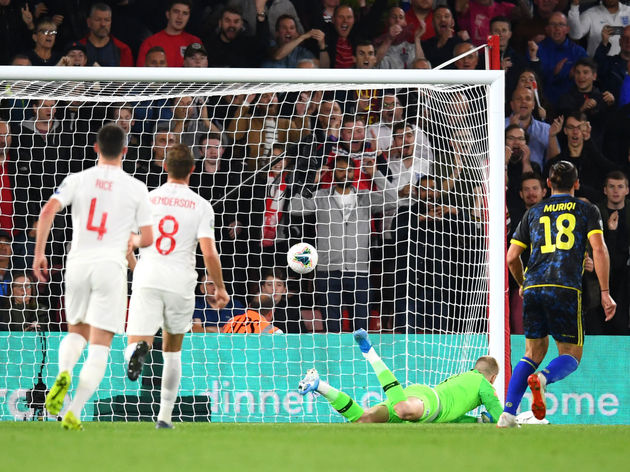 ​Harry Maguire then conceded a needless penalty, and whilst Southgate's side remained comfortable winners, the game didn't pass without some nervy moments.

It was the same lackadaisical decision-making that cost England dearly in the Nations League semi-final defeat to Holland, and rather than being ironed out with practice, it's creeping more and more into their game.

Admittedly, the game was already won this time, and England were able to blow their weaker opponents away with their lightning front line. But that's far from the only takeaway this game produced. The fact is, the England boys are not ready to go toe-to-toe with the European heavyweights, and come the summer, they'll find themselves in the same position as in 2018.

Close, but not close enough.

Imagine how many goals England’s attack would score against England’s defence.

There are still too many questions to be answered over the defensive selections, and with every passing international break Southgate seems further from the answers. ​Liverpool's Joe Gomez seemed destined to partner Maguire at the heart of England's defence, but his lack of game time and recent injury record will come as a concern to Southgate.

​John Stones is also suffering from a string of fitness issues which is keeping him out of the ​Manchester City side, and his dreadful performance in the Nations League semi-final has left him firmly out of favour with the England boss.

If Keane is next in line to pair up with Maguire, Three Lions' fans must be fearing the worst.

Southgate is truly bound to his principles, and will not stray from his desire to play out from the back and invite pressure. In any format other than knockout football, his determination to succeed with such a risky strategy would be commendable.

Over a 38 game season, a couple of self-inflicted defensive errors can cost a team a handful of points. In International football, it can end your entire tournament in the blink of an eye. Without the day-to-day practice as a closely-knit squad, it's impossible to truly feel confident as a defensive unit, and this leads to the majority of the mistakes at the back.

England need to sort out this defence 

England's struggles against the bigger sides have highlighted this damning fact, even on the back of victory. When the blistering front three took apart Spain in Sevilla, it was heralded as one of the nation's greatest modern footballing triumphs.

Once again, Southgate's side were electric going forward, but once the third goal went in, the players collectively froze and were very fortunate to come away from Spain with three points.

England's inability to beat the top teams will come back to haunt them time and time again, but the blame won't be laid at the feet of ​Kane, ​Sterling or Sancho. Southgate is determined for his players to live by his sword, but the axe may fall quicker if the Three Lions press the self-destruct button again over the summer.