​Raheem Sterling has expressed his delight at being able to assist youngster Jadon Sancho to score his first international goals on Tuesday night as England beat Kosovo 5-3.

Sterling revealed the Borussia Dortmund forward made a late-night plea to him ahead of the game against Kosovo in which Sancho begged the Manchester City star to square him the ball if the opportunity came.

The Manchester City star went on to set up both of the 19-year-old's goals, although there is still some doubt as to whether he was trying to chip the keeper or pass to Sancho for the second, which made him the youngest player to score a brace for England since Wayne Rooney. The Premier League's second top scorer this season was the standout man during the 5-3 win, scoring the equaliser and setting up skipper Harry Kane to put England ahead before turning his attention to accepting Sancho's plea.

Speaking after the game, with quotes carried by the ​Mail Online, Sterling revealed Sancho's request: " 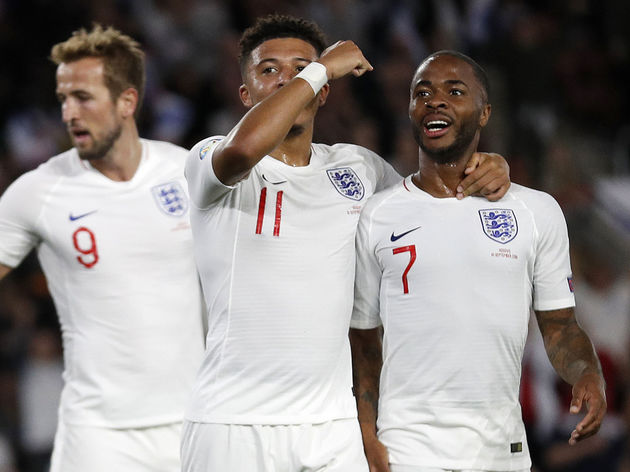 "He is a good kid, even when I was at that age I wasn't doing some of the things he is doing, he is professional, he does all of his treatment, he is in the ice bath.

"I see that he really wants to do well and he has got the ability as well, he is not just relying on his ability. He is putting in hard work in the training sessions."

Sterling continued his astonishing form, putting in an unplayable performance during the first half against Kosovo which saw England leading 5-1 at the break.

The forward seems a different player to the one that went 1,000 minutes without an international goal but Sterling has said that he always backed himself to show his quality.

On his tough start to his international career the 24-year-old said: "

"Until I saw how bad they were I put extra pressure on myself to score. I said to myself that once my first goal went in I knew the goals would come after that and that is all I was waiting for. "That night in Spain when I scored two from then I knew I would kick on and score goals.

"The last two years with my club has been terrific scoring goals and all I have wanted to do is do it on the international stage, not just score goals but score goals that will help my team to win football matches."