Having delayed his start to pre-season because of international duty with Argentina at the Copa America over the summer, Messi suffered the issue in training in early August. SPORT notes that even though the strain was considered to be ‘minor’, the Barça captain has still not been able to train without discomfort. He has therefore still not resumed full training and the Valencia game at Camp Nou this weekend has come too soon for him to be involved.

Without Messi, Barça have only taken four points from a possible nine in La Liga and already trail early leaders Atletico Madrid by some distance. An opening defeat against Athletic Bilbao was later compounded by a 2-2 draw with Osasuna in their most recent outing.

But not only have the reigning Spanish champions been without Messi, a calf complaint has also limited Luis Suarez to just 37 minutes of action, limping out of the Athletic defeat in the first half. 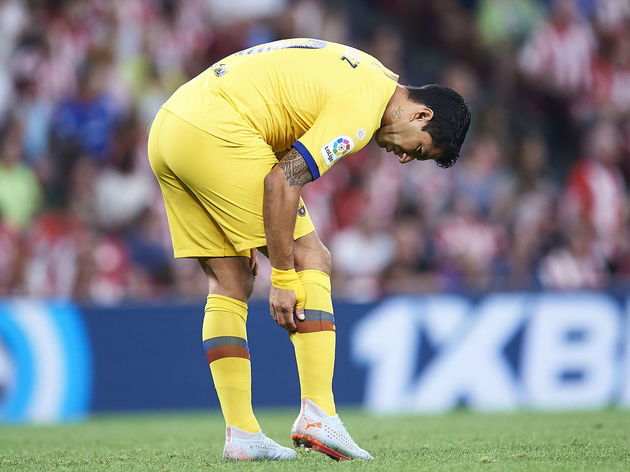 The Uruguayan, who has scored 177 goals for the club since arriving in Catalonia in 2014, hasn’t been seen since and SPORT still considers him a doubt for Valencia in a few days.

In the absence of both Messi and Suarez, €120m summer signing Antoine Griezmann has been leading the line, flanked by Rafinha, who has left for a loan at Celta Vigo since the most recent game, and 21-year-old Barcelona B graduate Carles Perez.

Injury-plagued winger Ousmane Demebele has also been missing after suffering a hamstring problem that is expected to keep him sidelined for another two or three weeks.