Marcel Halstenberg's stunning volley at the start of the second half helped Germany claim a 2-0 victory over a courageous Northern Ireland in Belfast.

The hosts settled quickest and should have taken the lead when Conor Washington latched onto a Toni Kroos error, but the striker's clipped effort was smothered by Manuel Neuer. Die Mannschaft dominated possession thereafter, Timo Werner's deflected snapshot bobbling just wide as the crowd held its breath. With the break near, a quick interchange between Corry Evans and Stuart Dallas saw the latter break free down the right and flash a wicked delivery across the box. However, Washington was once again unable to finish a gilt-edged opportunity.

Joachim Löw's team came to life following that miss, Werner the first to be denied by the superb Bailey Peacock-Farrell. Lukas

O'Neill has worked wonders to turn the Northern Irish from whipping boys into a genuinely competitive outfit. Over the course of eight years at the helm, he has gradually forged a side that can go toe-to-toe with heavyweight nations. The 50-year-old must take a huge amount of credit for this performance, with his side's hopes of making next summer's European Championships still alive as they lay second in Group C.

On the basis of this showing versus the 2014 world champions, O'Neill's men could still seal their qualification and deny either Germany or the Netherlands a place at the finals next summer. It's a tough loss to take, but there is plenty to be proud of.

Solid in defence and dangerous going forward, Dallas was a constant thorn in the Germans' side, with the defender blameless for the opening goal.

Nevertheless, the man behind him was the standout figure in the contest. Save after save frustrated Germany, the ​Burnley player showing cat-like reflexes and excellent athleticism to palm away the shots raining down on him.

Very rarely does a goalkeeper cover themselves in glory. His country may have been defeated, but Peacock-Farrell was in imperious form.

Just turned my TV on to @SkySports and for the last 5 minutes Northern Ireland are playing like Brazil!!

️ "Alexa, who is the best goalkeeper in the world?"

I am better than Conor Washington

To put it in very simple terms, Germany were not clinical enough. They were up against a man possessed in the Northern Ireland goal, yet Peacock-Farrell shouldn't have been given a chance with some of the opportunities that fell Die Mannschaft's way.

They got away with it on the night, but stiffer opponents will punish them. What's more, they looked porous in defence and sides like France will rip them to shreds if they put in similar displays in the future. If nothing else, this slender victory exposed a number of weaknesses in Lö

A stuttering performance from the away team was still enough to claim the three points, in no small part due to the efforts of Gnabry.

Whilst his teammates lacked composure and a killer edge, the ​Bayern Munich winger added impetus and kept the opposition backline on high alert. 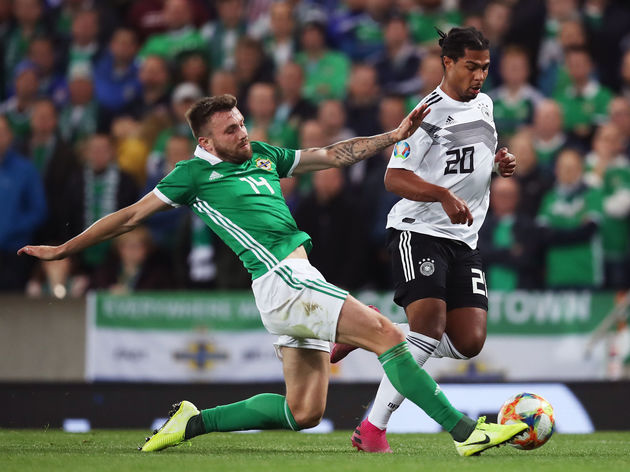 Had he not been so relentless with his direct dribbling, it is doubtful whether Germany would have found the breakthrough. Thanks to Gnabry, Northern Ireland were penned back in their own half, the pressure continuing to build until the Irons finally caved.

His score in the dying embers was merely the cherry on top of a fine all-round display.

Serge Gnabry has now scored nine goals in his first 10 appearances for Germany.

Germany's next fixture is a friendly with Argentina on 9 October, with Die Mannschaft resuming their Euro 2020 qualifying campaign five days later against Estonia.

O'Neill's recruits are back in Group C action on 10 October as they travel to De Kuip to face third-place Netherlands, before playing an exhibition match away to Czech Republic on the 14th.