United have started the season poorly, and already find themselves seven points behind leaders Liverpool after just four games. A dreadful home to defeat to Crystal Palace was followed by a lacklustre performance away at Southampton, which saw Ole Gunnar Solskjaer’s side pick up a point. Victory on Saturday is therefore essential. However, Leicester are unbeaten so far this term, brushing aside AFC Bournemouth and Sheffield United as well as picking up hard earned draws against Chelsea and Wolves. Manager Brendan Rodgers has aspirations to muscle his side into the top six this year, and if they continue this current form, they could well do so.

It will therefore be a huge test for United on Saturday, with the Foxes arriving in Manchester full of confidence.

Tickets for the game are now sold out on both teams’ official club websites. However, in terms of resale, both sides provide the option to make season tickets available for other to use, if a supporter is unable to attend the match themselves.

​United have a few injury concerns, meaning they could be without five first team players for this weekend’s encounter with Leicester.

Jesse Lingard, who is ill, and Aaron Wan-Bissaka, who has a back injury, both returned to Manchester early from England duty and are doubts for the game on Saturday. Luke Shaw was also not involved with the England set-up this week due to a hamstring problem. Alongside this, French duo Paul Pogba and Anthony Martial did not feature for France this week and have been ​ruled out. Defenders Diego Dalot and Eric Bailly remain on the sidelines.

​Leicester meanwhile have a healthy team going into the game. Nigerian international Wilfred Ndidi and England left back Ben Chilwell both returned from their injuries last time out against Bournemouth and came through the 90 minutes unscathed which will have pleased Rodgers.

With Jamie Vardy and James Maddison, the latter of whom was unused again by Gareth Southgate in the international break, the Foxes will cause the United back line problems. Saturday’s fixture at Old Trafford will be the 129th time the two sides have faced each other and the 27th time in the Premier League. United have come out on top 66 times, with Leicester victorious 33 times, meaning there has been 29 draws between the sides. United have a good recent record against Leicester, losing just once to them in the Premier League in the last 19 meetings. That defeat came back in 2014 when Leonardo Ulloa inspired the Foxes to a 5-3 victory in a Premier League thriller. The neutral will be hopeful of a repeat on Saturday.

As eluded to earlier, Solskjaer’s side have not started the season well. Since their opening day success against Chelsea, the Red Devils have failed to win since, suffering an embarrassing 2-1 home defeat to Crystal Palace and struggling to a draw against ten-man Southampton in this time.

For Leicester however, they have started the campaign rather impressively. Like just Manchester City and Liverpool, they are yet to lose in the ​Premier League this season, picking up two wins and two draws. 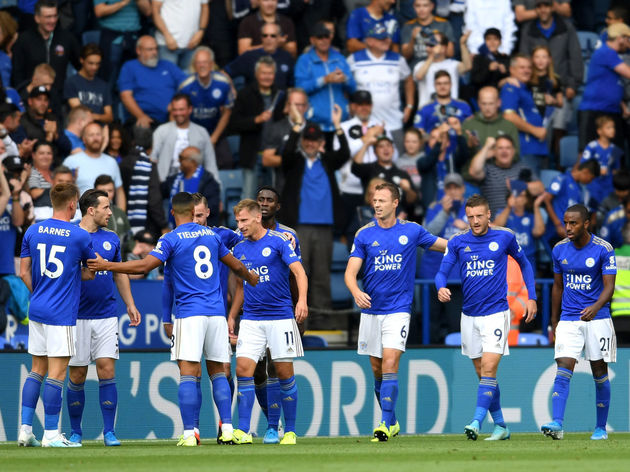 The Foxes have already visited one of the ‘big six’ this season and performed well, as they drew away at Frank Lampard’s Chelsea. If a performance of this nature can be repeated this Saturday, then they will cause United problems.

Here’s how the two sides have performed in their last five fixtures.

The pressure is already on this young United side, with the Old Trafford faithful demanding a win this weekend. However, Leicester performed

United have failed to keep a clean sheet in their last three games and it is hard to see that changing this weekend. Whilst the form of the new signings and ​Daniel James in particular has been impressive, the rest of the squad have not yet performed to the required levels this term, and Leicester will fancy they can pick up a result on the road.