The September international break brings with it, an early period of reflection for the clubs. Roy Hodgson will be pleased, but cautiously optimistic, with his side's performance so far.

Their campaign began with a credible draw at home to Everton before losing to Premier League new boys Sheffield United at Bramall Lane. That loss clearly spurred Crystal Palace on though, picking up an impressive win away at Manchester United the following week before seeing off Aston Villa the following week.

These results leave Palace in fourth - a positive start for a side who usually struggle at around this time of year. It's been mostly good, but there have also been some negatives. All are covered below... You'd forgive ​Palace fans for collectively groaning when the club announced they had signed Jordan Ayew on a permanent deal from ​Swansea this summer. The forward, not known for his goalscoring abilities, joined Palace on loan last season and got just one goal in 20 appearances.

Hodgson clearly saw something in Ayew however, and he's repaid that faith by scoring two goals in three games. He bagged Palace's opening goal in their 2-1 defeat of ​Manchester United, before getting the winner against ​Aston Villa the following week.

His overall performances have been decent too and, with his goal tally already doubled from last season, who knows what kind ​of season he'll go on to have. In fairness, he had a very good first season at Selhurst Park, getting 17 goals in 40 games, but has scored just four goals in his subsequent 54 appearances.

He has continued his poor goalscoring form into the current season, failing to score in Palace's two opening games despite starting. Hodgson, clearly frustrated with the striker, dropped him to the bench for both of the Eagles' victories. Of course, their best performance came in their 2-1 defeat of Manchester United at Old Trafford.

Ayew easily slid the ball past David De Gea in the 32nd minute to open Palace's account for the day, but all their hard work looked to have been undone when Daniel James equalised for the Red Devils in the 89th minute.

Palace weren't about to give up though, and Patrick van Aanholt got a stoppage-time goal to give the Eagles a much-deserved victory. 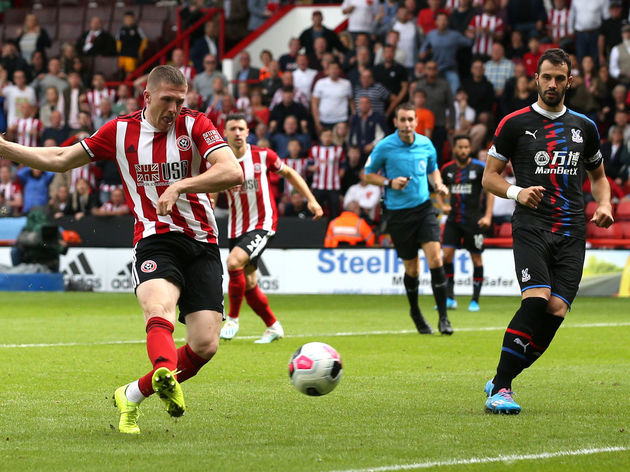 ​Despite having more possession and more shots on targets than ​Sheffield United, Palace couldn't make any of it count as they fell to a disappointing loss to the ​Premier League new-boys at Bramall Lane.

It was a performance that demonstrated their need for a more consistent, quality striker, and there'll probably be many more performances like this if they don't buy adequately in January. Having scored just three goals so far this season, there aren't many candidates to choose from for this award.

Out of the three, Ayew's winner against Aston Villa stood out the most. Jeffrey Schlupp played a good pass to the forward, who sprinted ahead of Villa's defenders to collect the ball before hitting a low ball past Tom Heaton to give his side the lead. Solid without being remarkable, there are still many positives to take away from August.

Palace will be quietly confident ahead of their match against a comparatively out-of-form ​Tottenham Hotspur after the break. Hodgson's message to their players ahead of that clash will probably be something like 'More of the same, lads'.