​Ah, Twitter. At its best, Twitter is a platform which allows people from all over the world to interact and discuss what's going on. Sounds harmless, right? Wrong. Oh, so very wrong.

A lot of the time, people use their platform to vent frustrations towards others, and footballers are no exception. We've seen plenty of stars come to (virtual) blows online, which often makes you just want to grab some popcorn and watch the whole thing unfold.

Here are seven of the biggest (and best) footballer Twitter feuds... Shearer took to ​Twitter to blast Owen for his comments, and the former ​Liverpool man responded by questioning Shearer's loyalty and claiming that Shearer actually tried to leave St James' Park during his career.

Yes Michael, we thought that also, whilst on £120k a week..... @nufc https://t.co/bzzEDdjdN1 pic.twitter.com/I4CdsQcKKr

The pair seemingly can't stand each other, which makes for entertaining viewing. The exchange between Joey Barton and Dietmar Hamman back in 2013 appears to have been deleted now, but thankfully ​The Guardian's article about it all hasn't.

​Barton questioned ​Queens Park Rangers' signing of striker Loic Remy, and Hamann told Barton to do his talking on the pitch instead. Things escalated incredibly quickly, as Hamann criticised Barton's lack of professionalism.

Barton wasn't happy and ended up calling Hamann an 'idiot', a 'maggot' and a 'dog', claiming that Hamann was only looking for publicity. If that was true, then it was certainly a convincing performance from the former Liverpool man. 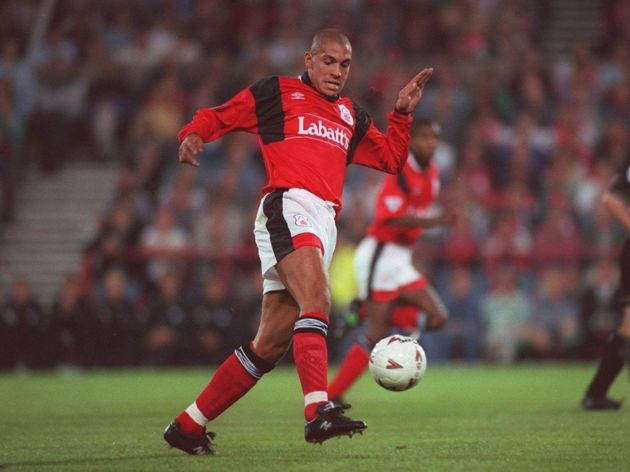 Ever the joker, former ​Manchester United defender Rio Ferdinand saw the opportunity to involve himself in a little spat between Stan Collymore and Karl Henry. It all looked harmless, but not to Collymore.

The former striker clearly wasn't in the mood for a joke, challenging both Ferdinand and Henry to face up to him after QPR training to settle their differences. Collymore even called Ferdinand a '​Twitter gangsta' (note the use of 'gangsta' instead of gangster, because he's especially cool).

You’ve been giving it for time @rioferdy5 so not surprised to see you pipe up. Meet me at #QPR next week when i’m down twitter gangsta.

Obviously it amounted to nothing, because that's just how Twitter spats work. Collymore loves a good Twitter fight, and it looks like nobody is safe from him. This time, the striker ​reacted to comments from ​Aston Villa defender​ Joleon Lescott, who was relieved to see his side relegated in 2016.

Lescott wasn't best pleased and reached out to Collymore, who posted their private conversation online (via the ​Daily Star) for the world to see. In the message, Lescott invited Collymore to meet up and sort out their issues 'as men', which basically either means he was looking for a fight or wanted to discuss the best way to get a BBQ to stay lit.

Collymore later deleted the messages, jokingly ​suggesting that the messages accidentally sent whilst his phone was in his pocket. Lescott surely understood, as the same thing totally did happen to him when he posted a picture of a luxury car after being relegated. It did happen. It did... Sunderland and ​West Bromwich Albion played out a 0-0 draw back in 2016, in which Lamine​ Kone and James McClean clashed on a number of occasions. Kone chose to continue the feud online (via ​The Mirror), asking his fans 'Who Is James McClean?'.

The pair then exchanged words, before McClean posted a picture of himself smiling, with the caption:

Kone clearly couldn't come up with a good comeback, and wisely chose to end the drama there. The two teams may have drawn in real life, but McClean certainly picked up a victory afterwards. Perhaps the most concerning inclusion on this list, the beef between Michael Chopra and Ashley Williams from back in 2014 has gone down in social media infamy.

Nobody really knows why, but Chopra took to Twitter to threaten to release 'texts and pictures' if Williams did not get in touch with him ASAP. The defender did not, and ultimately decided to delete his Twitter account because of the whole thing.

Not prepared to accept defeat, Chopra then went on to message Williams' former teammate Wayne Routledge to say: 'Tell your pal to get in touch with me Ashley the f*****g mug'. Charming. ​Wayne Rooney has been an iconic Twitter figure ever since asking Rio Ferdinand if he wants picking up in the morning, and he only confused/delighted fans even more when he ended up fighting himself in 2011.

If you look at it completely out of context, Rooney tagged himself in a ​post which read: "

@WayneRooney I'll put u asleep within 10 seconds u little girl. Don't say stuff and not follow up on it. I'll be waiting