England continued their perfect start to Euro 2020 qualification on Saturday afternoon, as they beat Bulgaria 4-0 at Wembley.

It was some poor Bulgarian defending that resulted in England's opener, as Harry Kane found the back of the net. A stray pass from goalkeeper Plamen Iliev was pounced on by Raheem Sterling, who pulled it back to Kane to sweep home and put the Three Lions ahead.​

England continued to dominate the visitors, and got the chance to double their advantage early in the second half as they won a penalty. Marcus Rashford was brought down in the box, and Kane stepped up and slammed it past Iliev to give the hosts a comfortable advantage.

Starting the season with a win at @wembleystadium.

Sterling wrapped it up soon after with a close range finish, as Kane found him in the box. Despite having a defender hot on his heels, the Manchester City man made contact with the ball and guided it in from a yard out to all but put the game to bed at Wembley.

Kane got his chance to seal his hat-trick, as England were awarded another penalty for a foul on the Tottenham man. The captain stepped up once again and made no mistake, going the other way and scoring once again to wrap up a wonderful treble at Wembley. England were expected to win this game on paper, but after discovering their opponent's defensive tactics they realised that it wouldn't be easy at first. The Three Lions were dominating from the start, but struggled to break down a stubborn and resolute Bulgaria side.

It took a bad defensive mistake to let England in to take the lead, and from then on they became ruthless. The hosts had finally settled in and taken control of the game, and they added three more goals in a dominant and excellent performance, securing a well-deserved win.

While Bulgaria didn't really threaten, England did really well to neutralise the visitors and cruise to an encouraging victory in north-west London. It is another excellent result for Gareth Southgate's side, who made it three wins from three and returned to the top of Group D.

STAR MAN - There was only one man who was going to be star man. Harry Kane had an outstanding game, producing a clinical performance as ever to score a fantastic hat-trick. His finishing was top class and he was reliable as ever, in an outstanding display for England.

While Kane will steal all the headlines, there are a number of England players who also deserve praise. ​Raheem Sterling was crucial in attack as he got a goal and an assist, while J​ordan Pickford made some excellent saves when he was called upon. 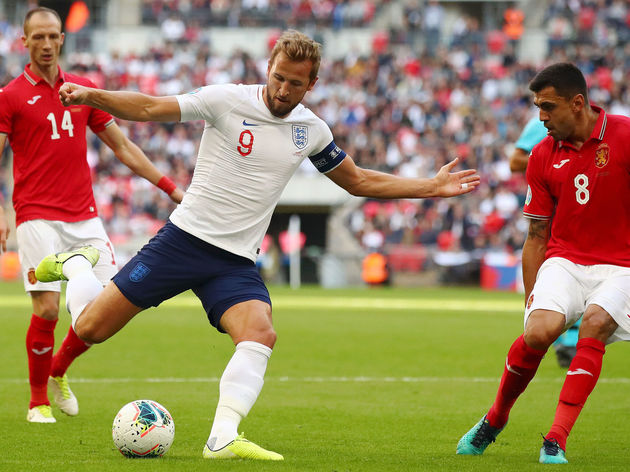 England travel down to the south coast for their next qualifier, as they welcome an unbeaten Kosovo to to St. Mary's next Tuesday. The Three Lions are then back in action in just under a month, travelling to Prague to face the Czech Republic on 11 October.

Bulgaria go over to Dublin next for an international friendly, as they visit the Republic of Ireland next Tuesday. The Lions' next qualifier on 11 October is a tough away day, as they face Montenegro.