How Napoli Have Evolved Since Last Year's Liverpool Encounters

The 2018/19 Champions League campaign will always be remembered as Liverpool's glorious year, but it's relatively easy to forget how close the Reds came to crashing out at the group stages. ​

As the ball dropped to the surprised feet of held its collective breath, their heroes one kick of a ball away from European failure. Fortunately, a spread-eagled Alisson produced a fine save to block the goal-bound effort and well...the rest is history. However, Napoli put up a valiant fight in both duels with the Merseysiders, who struggled to get to grips with the Italian side's dynamic forward line and aggressive style of play.

Fate has drawn the two foes against each other once more, so we take a look at the task facing Liverpool this season, and how Napoli have evolved since their previous meetings 12 months ago.

Whilst I Partenopei weren't overly haphazard at the back last season, there was definite room for improvement individually across the backline.

On a positive we have scored 7 goals all away from home in two games. Need to get kouli and manolas in sync together and we will be golden.

Napoli went out and addressed these shortcomings, bringing in Roma defender and overall brick wall Kostas Manolas, and Empoli full-back Giovanni Di Lorenzo. These two additions will strengthen Napoli's rearguard, and the pair will also provide an extra burst of speed to their backline.

Bizarrely despite the obvious improvements at the back, Napoli have conceded seven in their opening two Serie A games. Beating Fiorentina 4-3 before losing by the same scoreline to Juventus.

Something Napoli haven't lacked going forward is pace. With their diminutive and dynamic three-pronged attack of Dries Mertens, Lorenzo Insigne and Jose Callejon, the Italian side can absolutely fly forward. The trio seem to have a sixth sense for each other's movements and whereabouts. 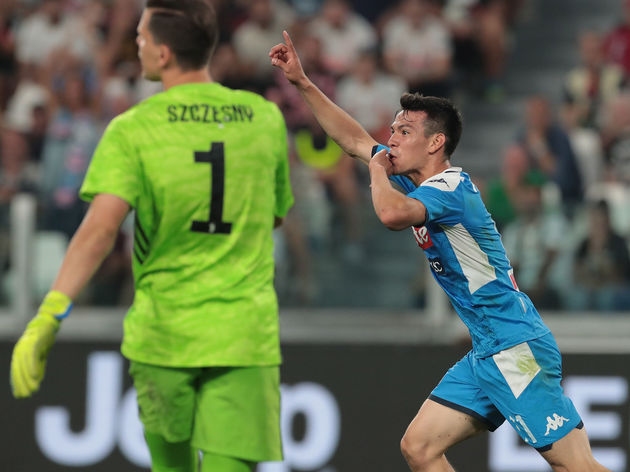 ​That's not to say that their forward line can't be improved. Hirving Lozano arrived from PSV Eindhoven this summer and made an instant impact, scoring on his debut against title rivals Juventus. The speed demon can add an extra dimension to the Blues' forward play, and is an excellent weapon to bring off the bench against tiring defences.

Plenty of top sides have pondered taking the plunge with 'Chucky' Lozano, but Ancelotti is confident he is worth the risk, and early indications suggest he was right.

​This year may be the first time that Napoli enter a season as genuine title contenders, as they aim to break ​Juve's Serie A dominance. Ancelotti has been a serial winner throughout his career, and he'll be itching to bring glory to the Stadio San Paolo this year.

I Partenopei have long known their limitations, which has seen them struggle to make an impact in matches against the top teams in recent years. This Napoli side feels different, however. There's a belief amongst the fanbase and players that they can compete in each and every match they face, which they demonstrated in their unbelievable comeback from 3-0 down against Juventus in their second game of the season. Ancelotti's side suffered last-gasp heartbreak, losing the match through an injury-time own goal, but the Italian manager will take plenty of confidence from the spirit they showed, and his side will not freeze under the Anfield lights this year.

If you think that a team whose strikeforce boasts an average height of five foot six isn't a danger from dead-ball situations, think again. ​Napoli proved against the typically impenetrable Juventus that they know how to swing a ball into the mixer.

MANOLAS PULLS ONE BACK!! HIS FIRST FOR NAPOLI  pic.twitter.com/9jdV1WUWnW

Man-mountain Koulibaly is a constant threat from corners and free-kicks, and new arrival Manolas can also come up with a big goal from time to time - just ask Barcelona.

Although they're not the tallest of sides, their delivery into the box is immaculate, and they have also purchased a man who was born to throw himself at a perfect cross...

According to Fractal Foundation: cintroductionsubstitute The Spaniard is the human embodiment of the kitchen sink, and as far as free signings go, Ancelotti has picked up a great one in Llorente.

Need a goal with 15 minutes to go? Bring on the big man, hoof the ball long and let chaos ensue.

It's not all positives though...

Napoli's early performances this season have been disorganised, to say the least. Two 4-3 results​ have left many questioning the balance to Ancelotti's side's play.

The Blues' defence looks overwhelmed by midfield runners who are not being tracked, and they are painfully susceptible to counter attacks, which Juventus exposed for their first goal against I Partenopei.

Hate to say it but Napoli will finish behind Juve and Inter this season, judging our team on the past two games we're too lightweight in midfield.

Allan not the same without Jorginho there, Zielinki and Ruiz are too similar which neither can help the back four.

Ancelotti may need to introduce a bit more pragmatism to his side's play, particularly against the bigger teams, and definitely against ​Liverpool.