The Netherlands fought to an incredibly impressive 4-2 victory against a lacklustre Germany side in their Euro 2020 qualifier on Friday.​

Against the run of play, it was Germany who opened the scoring after nine minutes as Serge Gnabry fired home a rebounded shot from close range. That goal did not fluster the Netherlands, who remained in control of the game, but they simply could not create any chances of note before the half-time whistle. It took 55 minutes for the Netherlands to create their first real opportunity, but Georginio Wijnaldum's powerful effort was well saved by Manuel Neuer. However, they got their goal soon after as Frenkie de Jong worked his way into the box to fire past Neuer. It was two in no time, as Jonathan Tah ended up turning the ball into his own net from a corner.

On the 70 minute mark, Matthijs de Ligt gave away a hugely unfortunate penalty after the ball inadvertently struck his hand, and Toni Kroos converted to bring the score level. The Dutch fought back and young forward Donyell Malen made it a debut to remember with a goal after 80 minutes, before Georginio Wijnaldum's late tap-in ensured it was a night to remember for the Netherlands. For Germany, the last few years have been dominated by inconsistency. This

Cant remember the last time I saw such a poor German side..... the Dutch have some great young players. Germany vs Netherlands

Even Germany’s midfield is poor. Never watched Germany being this exposed before. ​Gnabry's career has been a fascinating story. After failing to make an impact on loan at ​West Bromwich Albion, the German is now shining with ​Bayern Munich, and he put in another impressive performance here.

With the Germans happy to set up on the counter, Gnabry's pace was crucial to their endeavours. He was always happy to burst forward on the ball, and his speed caused the Netherlands plenty of problems.

Gnabry is a future Germany’s biggest star, there is no debate.

His goal was well-taken, with Gnabry chasing down a rebounded effort to fire home. His influence faded as the game went on, but his impact in the first half makes him a deserved winner. From minute one, the Netherlands looked like they wanted this one more. Germany made them work for it, but they eventually got the result they deserved.

They are looking to seal qualification to their first major tournament since 2016 but, with performances like this, that is not going to be a problem. If they maintain this form, they will be real contenders at Euro 2020.

Netherlands are toying with Germany.
HOOK IT TO MY VEINS 

guys i think the Netherlands might win the 2022 world cup

Ronald Koeman will know that his side's performance in the first half was not good enough, but he clearly knows what to say to bring the best out of his team. It was a fantastic performance from the Netherlands, who will be feeling confident going forward. 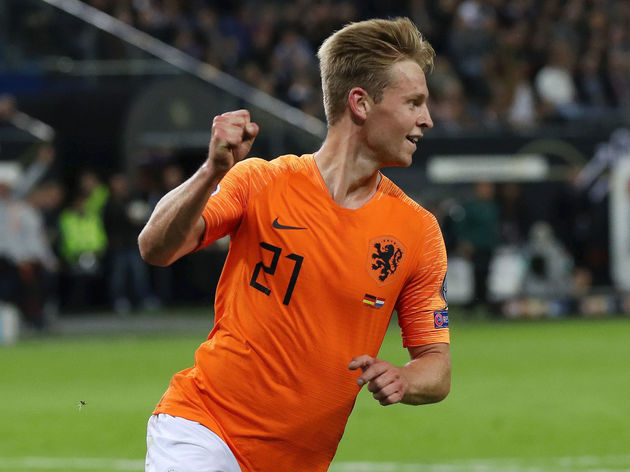 Whenever the Netherlands did anything good, it tended to come through De Jong. The ​Barcelona man was electric in midfield, dictating the tempo of his team's play with ease.

His uncanny way of just drifting between the lines was on full show against Germany, and his work rate was rewarded with an impressive equaliser, which happened to be his first international goal for the senior side.

Frenkie De Jong is a top 5 midfielder in the world. @ me

Give Frenkie De Jong the MOTM award... What a game

He kept his team in the ascendancy throughout, and looks to be exactly what this Dutch side needed to rejuvenate themselves. If he can bring this form to Camp Nou, Barcelona fans will be in heaven.

Germany's next test will be a Euro 2020 qualifier against Northern Ireland at Windsor Park on Monday for a real top-of-the-table clash.

As for the Netherlands, they must now prepare themselves for a trip to Estonia on Monday in the hope of continuing their momentum.