The 23-year-old, who was named United Women’s Player of the Year at the end of the triumphant 2018/19 promotion campaign, takes over the armband from Alex Greenwood after the former skipper completed a move to European champions Lyon last month.

Born in nearby Oldham, Zelem has a long association with United that stretches back to 2004 when she joined the club’s centre of excellence at the age of just 10.

But with United operating no senior team until last year, Zelem was forced to leave in 2013 in order to pursue her career and made the short journey to Liverpool, winning the 2014 WSL title.

Zelem traded England for Italy in 2017 when he she joined Juventus, but returned home a little over 12 months ago to be part of United’s first ever senior women’s squad. 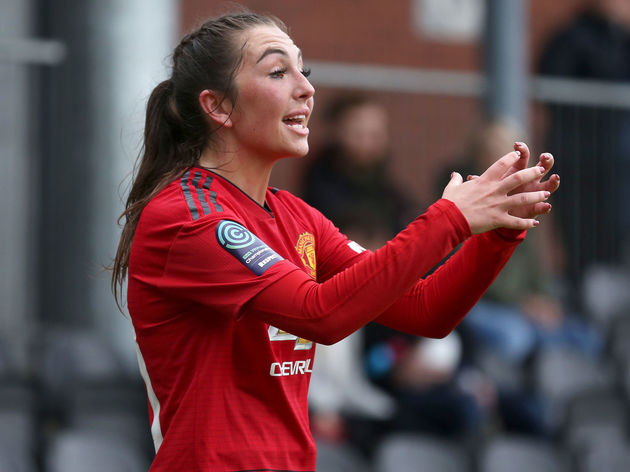 “It needs to be someone the players trust and respect, someone who is capable of challenging both the players and the staff,” United manager Casey Stoney said of the captaincy to MUTV.

“It’s not been easy because we’ve got some fantastic characters in our group, but I have chosen Katie Zelem to lead us forward because she’s our most vocal player. She does lead by performance and communication and I just think the armband will add to her game, both on and off the pitch.

“She’s very honest and is also very supportive of the players. I’ve seen a different side to her at times, so, for me, she stood out.”

Zelem will be leading United out as the WSL season gets underway this weekend. Not only is it the club’s first ever WSL game, it is also the first ever women’s Manchester derby at this level.

Manchester City have moved the game to the Etihad Stadium and more than 20,000 tickets have been sold, with demand far outstripping the capacity of their usual 7,000-seat home.

Click here for 90min’s full preview of the 2019/20 WSL season, including key players, major transfers, team expectations and how to watch.