After four Premier League games, Chelsea have managed to pick up just the solitary win, away at newly promoted Norwich City.

Two demoralising home draws plus a battering at Manchester United on the opening weekend has left them in 11th place - already seven points behind leaders Liverpool. Whilst Lampard has got this youthful side playing attractive football, which has worked well in periods of games, they have failed to sustain this level for 90 minutes.

Chelsea supporters are already frustrated, but is it as bad as some are making out?

Here is 90min’s take on Chelsea’s opening month below. Whilst Tammy Abraham has found the net four times, 20-year-old Mason Mount has been the real shining light for Chelsea in quite a bleak opening month.

Abound with energy and quality, Mount has been a real danger in the final third and has repaid Lampard’s faith in him by scoring twice.

Firstly, his awareness to steal the ball off Wilfred Ndidi and drill the ball past Leicester City keeper Kasper Schmeichel was really impressive. Following this, against Norwich, he was composed and clinic when finding space in the box leathering home his second goal for the club.

His impressive performances have resulted in him being nominated for the August ​Premier League Player of the Month award and earning a maiden call-up to the England senior squad. Yes, he is the ​Chelsea captain and yes, he has had a brilliant career at the club, but Cesar Azpilicueta (breathe a sign of relief Willian) has had a terrible start to the season and should be dropped from the side.

Seemingly targeted by the opposition each week, the 30-year-old was at fault for both goals against Sheffield United last weekend. (which we will get onto in more detail later) Firstly, he was nutmegged by Edna Stevens in the build-up to Callum Robinson’s goal before he failed to prevent Stevens’ cross for the late equaliser.

On top of this, the Spaniard was also at fault for two of the goals in the 4-0 defeat at Old Trafford and it does seem like his legs have gone. The Blues 3-2 victory away at Norwich must be seen as the best performance of the month, mainly as it was the only game they picked up all three points in the ​Premier League.

Whilst defensively they struggled to cope with Canaries forward Teemu Pukki, the performances of Tammy Abraham, who scored twice as well as Mason Mount and new signing Christian Pulisic will have pleased Chelsea fans greatly, as the trio interchanged brilliantly and flowed in attack.

If they can maintain that level on a more consistent basis, and against better sides, Lampard’s side will climb the table and challenge for the top four. Many would think the 4-0 defeat to Manchester United would come here, but in truth Lampard’s side played well for large parts of that game and the scoreline was a little unfair.

However, the ​Sheffield United game last weekend was an absolute disgrace of a performance. From 2-0 up and in control against a newly promoted side at Stamford Bridge, Chelsea were naive and lacklustre as they threw away a two-goal led in the Premier League for the first time since 2013 when an Adam le Fondre double pegged them back against Reading.

From 2-0 up, Chelsea rarely threatened after the moment Dean Henderson had denied Tammy Abraham his hat-trick early in the second half, as they sat back and paid the ultimate price when Kurt Zouma squirmed the ball into his own net late on.

This was the prime example of players switching off and trying to coast home in a Premier League game. All the good work achieved at Norwich was undone here and the supposedly experienced players should take a look at their own performance. 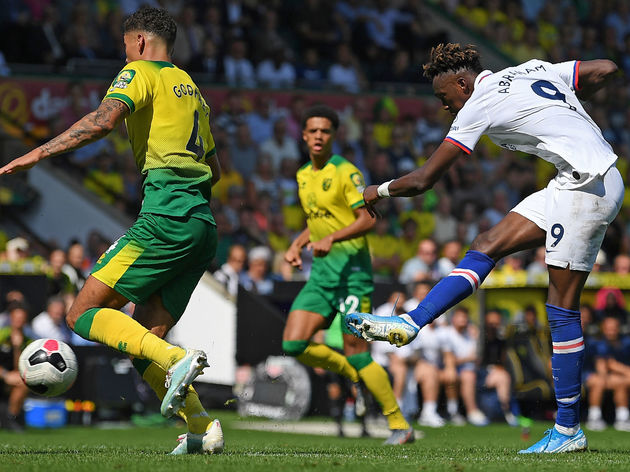 This one goes to Abraham and his second goal against Norwich which turned out to be the match-winner.

Mateo Kovacic picked up the ball centrally in his own half and struck a perfectly weighted pass 20 yards along the turf into Abraham. The English youngster then turned and ran at defender Grant Hanley before firing past Tim Krul into the bottom left hand corner from the edge of the box. Wonderful stuff. Whilst the youngsters, who many say need time, have performed well on the whole, it is in fact the experienced players who have let the side down.

The defence is the weakness and it has looked vulnerable in every game. In fact, the Blues have conceded nine goals already, with only Norwich conceding more in the whole league.

Victory at Norwich may have been seen as a turning point, but the terrible second-half performance at home to Sheffield United put an end to that talk and Chelsea under Lampard are yet to find any sort of consistency.