The 20-year-old was a key performer for the Hammers in the heart of their midfield last year, making 34 appearances in the Premier League, which in turn earned him an England call up.

His rise to prominence led to him being linked to ​Manchester United this summer, as Ole Gunnar Solskjaer targeted young British talent. However, while Rice was aware of the speculation, he has insisted that he is more than happy learning his trade in east London for now. 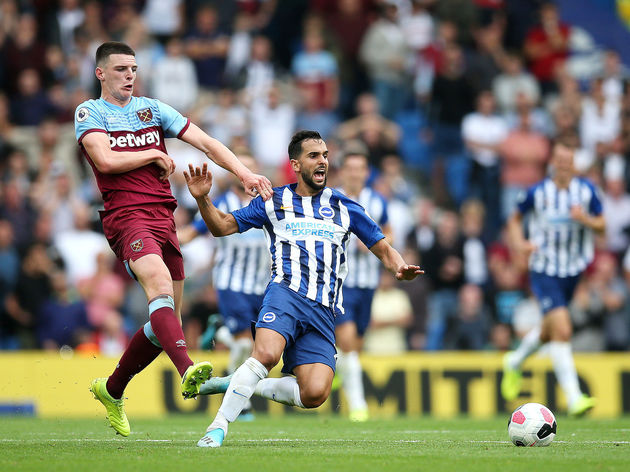 Speaking to FourFourTwo (as quoted by the ​Mail Online), Rice has not ruled out a future move, saying: “Don't get me wrong, I think I've got the ability to play for a club like that [Man Utd].

“But it's all about the timing and I don't think the timing is right for me at all. I've still got so much to learn.”

Whilst Rice's ambition may worry ​West Ham supporters, he maintains that he loves plying his trade at the London Stadium in front of a crowd who adore him and a manager who gets the best out of him. He added: “I'm loving it at West Ham, the connection between me and the supporters is special. I've become one of the fans' favourites and the manager likes me.

“It's the best place for me to play my football. I've signed a contract here for the next few years and I'm looking forward to playing this season and the season beyond, so we'll just see where it goes.”

The midfielder, who is clearly open about his future prospects did acknowledge that if he were to stay at the club for the majority of his career, he could earn himself a place alongside the likes of Sir Trevor Brooking as a legend. He added: “To be called a West Ham Legend in the future, maybe, would be a real honour.”