The 20 Most Valuable Squads in World Football - Ranked

It's no secret that there's plenty of money in football. Players are worth insane amounts these days, and squads have never been more valuable than they are today. 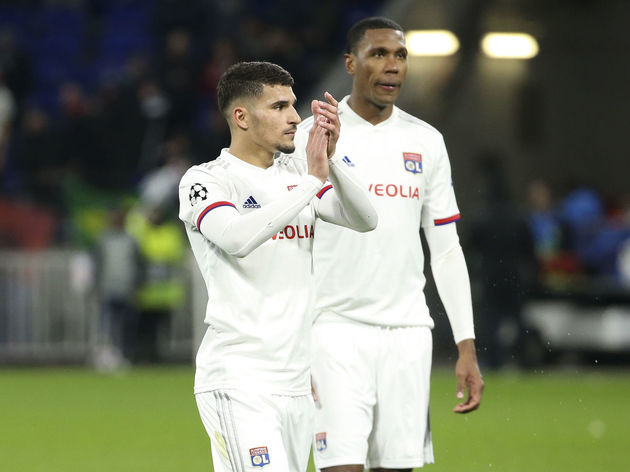 ​Sneaking into the top 20 makes Lyon the second-most expensive squad in France (no prizes for guessing who number one is).

The development of rising stars like Houssem Aouar (€70m), Moussa Dembélé (€50m) and Jeff Reine-Adelaide (€30m) has given a huge boost to Lyon's overall squad value, and having Memphis Depay (€50m) around helps that even more.

Lyon could sell now and make some guaranteed money, or let those youngsters blossom and watch the cash roll in down the line. Just like with Lyon, it's the younger players in the squad who Roma have to thank for their surge in value.

The midfield duo of ​Nicolò Zaniolo (€70m) and Lorenzo Pellegrini (€30m) make up a huge chunk of their overall value, and wingers Justin Kluivert (€50m) and Cengiz Ünder (€30m) offer their own little boost to the value.

Roma's squad value is also aided by the presence of loan players like Gianluca Mancini, Chris Smalling and Henrikh Mkhitaryan, who are worth a combined €75m. ​Everton have been splashing the cash in recent years, so it should come as no surprise to see them end up on this list.

Unsurprisingly, it is ​Richarlison who leads their value charts at €90m. ​Jordan Pickford, Moise Kean and Dominic Calvert-Lewin are all valued at over €40m, but nobody even comes close to Richarlison.

With Carlo Ancelotti in charge, Everton will hope to attract even more top-class players, which could see their value soar in 2021. ​Napoli have dropped down the standings compared to last year, but that's not to say there isn't real value in their squad still.

Several of their stars, such as Kalidou Koulibaly and Lorenzo Insigne, have seen their values drop to closer to the €40m mark according to CIES, but the biggest riser has been midfielder Fabián Ruiz, whose price tag is now at least €90m.

Piotr Zieliński also adds his own €50m to the value, but it's clearly the Fabián show at Stadio San Paolo.  ​ 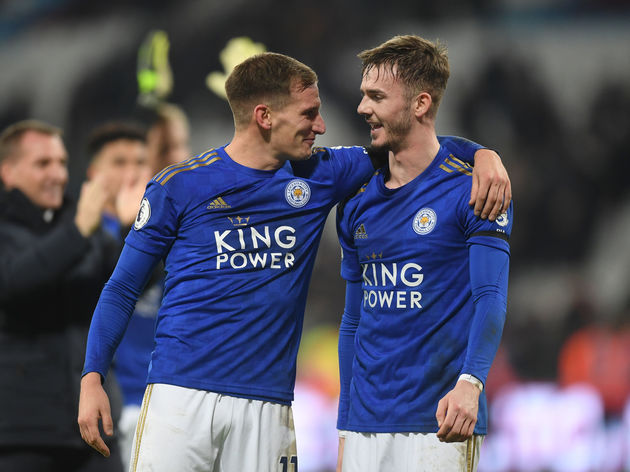 Edging out Napoli by just €1m is ​Leicester City, who have enjoyed a huge surge in value over the past 12 months, which is hardly surprising when you remember most of their squad are young stars.

James Maddison is the Foxes' €90m man, but he's closely followed by the €70m-rated Youri Tielemans €70m. Ben Chilwell, Wilfried Ndidi and Harvey Barnes all clock in at around €50m as well.

Leicester stand to make some serious money if they choose to sell, but they can sit back and watch their value increase if not. Given the way the 2019/20 campaign has worked out for ​Arsenal, it probably shouldn't be a surprise to hear that their squad value has dropped.

Star striker Pierre-Emerick Aubameyang is older and getting closer to the end of his contract, so his value has dropped to €40m, despite his impressive form on the pitch. ​

Interestingly, Nicolas Pépé still holds a value of close to €90m, despite struggling to showcase his best form during his first year at the Emirates Stadium. Julian Nagelsmann has constructed a squad full of exciting, young talent, so there are plenty of high-value players on RB Leipzig's books.

Their standout star is striker Timo Werner, who is valued at close to €90m. Considering he has a release clause worth around half that, you can see why so many European giants want to sign him.

The midfield pairing of Christopher Nkunku and Marcel Sabitzer both come in at €40m, and there are plenty of young stars who add their own hefty sums to the value. ​Bayern Munich may be Germany's most successful team, but at the current moment in time, they're not the most valuable. Stay tuned.

Joshua Kimmich and West Bromwich Albion reject Serge Gnabry top the charts with €90m valuation​s, while the on-loan Philippe Coutinho still holds a value of around €70m despite a tough few years.

Benjamin Pavard is up there as well, and then there's a seemingly infinite list of players worth around the €40m mark. ​Borussia Dortmund edge out their rivals to claim Germany's top spot, and that's almost entirely down to winger Jadon Sancho.

The Englishman's whopping €150m valuation is one of the biggest on the entire planet, but he's by no means the only star. Erling Haaland sits at €90m and Julian Brandt contributes €70m of his own.​

​Real Madrid loanee Achraf Hakimi is also worth €50m, so Dortmund's squad will take a hit once his loan deal comes to an end. Antonio Conte has overseen some big transfers since joining ​Inter, with Romelu Lukaku (€90m) and Christian Eriksen (€70m)​ representing some fantastic business from a financial point of view.

Lukaku's strike partner Lautaro Martínez also brings a €90m valuation, making them one of the most expensive attacking duos around.

Nicolò Barella, another Conte signing, is worth €70m, and they have already agreed to pay less than that to make his loan move permanent. ​Cristiano Ronaldo might be the biggest name in ​Juventus' squad, but because of his age, he is not the most valuable.

That's a status reserved for centre-back Matthijs de Ligt, who comes in at €90m. That's well ahead of Ronaldo, whose €70m valuation is also shared by Paulo Dybala and Rodrigo Bentancur.

Juventus run the risk of seeing their overall value drop as the years go on, given the vast majority of their squad are around 30 years old. 22-year-old Merih Demiral is currently sat at €30m, but he's one of only a few players whose values are likely to rise. Have a guess at who ​Tottenham Hotspur's most valuable player is. If you said anyone other than ​Harry Kane, you've lost it.

The striker brings a whopping €120m to the table, but that's not actually too far ahead of second-placed Dele Alli, who is probably pretty fortunate to be sat at €90m.

Son Heung-min and Giovani Lo Celso are both sat at €70m, and there are plenty of other pieces of José Mourinho's squad which could fetch a pretty penny if they entered the market.

​Atlético Madrid spend heavily when they need to, but they're best at spending wisely. They love to buy low and sell high.

Saúl Ñíguez is one of the best examples of that. The midfielder, who joined as a youngster, is now worth a huge €90m, which is the same as summer signing João Félix.

They might not have any €100m+ players, but what they do have is an army of stars worth huge figures. Álvaro Morata sits at €70m, ​while all their other regular starters come in at around €50m. It all adds up. Gee, I wonder where most of Paris Saint-Germain's squad value comes from.

​Kylian Mbappé actually breaks the scale with a value of somewhere over €250m, making him by far the most valuable talent in world football. By contrast, partner-in-crime ​Neymar is 'only' worth €90m.

That €90m valuation is shared by fellow Brazilian Marquinhos, with that trio alone making up nearly half of PSG's entire worth. Now we're into the big money. ​Manchester United are the first squad on this list to tip over the €1bn mark, and that's largely due to the youngsters in the squad.

Leading the way by some margin is forward ​Marcus Rashford, who comes in at €150m. That's well clear of anyone else, with winter signing Bruno Fernandes next up at €90m.

Somewhat surprisingly, Daniel James is third on the list with a valuation of €70m, but there are then countless stars worth €50m, including ​Paul Pogba, Anthony Martial and Harry Maguire. If there's one thing England is good at, it's inflating the price of English youngsters. If you need any proof of that, just look at ​Chelsea's current worth of €1.008bn.

Out in front is midfielder Mason Mount, who has been handed a value of €90m, slightly ahead of the €70m estimates given to Callum Hudson-Odoi and Tammy Abraham.

Kepa Arrizabalaga, Christian Pulisic and Jorginho also all earn €70m values, and you can see how quickly that all adds up. An injury-hit season has seen ​Eden Hazard's value drop down to €70m, but Real Madrid still have more than enough talent to steer them into the top four of this list.

What's interesting about Real is, unlike most other sides so high on the list, they don't actually have one player who is worth an astronomical amount. That €70m is as high as it gets for Los Blancos, but they do have three more players worth that: Raphaël Varane, Vinícius Júnior and Rodrygo Goes.

Beneath them, there are countless stars worth around the €50m mark, which is testament to Real's fantastic squad depth Just like Ronaldo at Juventus, ​Lionel Messi might be ​Barcelona's talisman, but he doesn't come with the biggest price tag.

Messi is actually rated at €90m, alongside midfielder Frenkie de Jong, but the clear leader is Antoine Griezmann at €120m.

Arthur Melo and Clément Lenglet both sit at €70m, before the typical army of €50m stars comes into play.​ There's a whole lot of money on show at Camp Nou, and that's why they're Spain's most valuable side. Given ​Manchester City's love of buying superstars, you'd be forgiven for assuming they'd be number one. They're almost €200m ahead of Barcelona, but even that's not enough here.

Making up a huge part of that is winger ​Raheem Sterling, who is hit with a value of over €200m, while striker Gabriel Jesus also sits at €120m. You then move into the overload of players with €90m ratings, with Bernardo Silva, Rodri and Ederson all there to say hello.

The fact that ​Kevin De Bruyne (€70m) doesn't even make the top five tells you all you need to know about City's embarrassment of riches. Sitting pretty at the top of the rankings are ​Liverpool, whose emergence as European champions has seen the value of their players soar through the roof.

​Mohamed Salah, ​Sadio Mané and ​Trent Alexander-Arnold have all earned values of at least €150m, and Roberto Firmino is not far behind on €120m.

Following that up are the €90m group, which features Virgil van Dijk, Alisson and Andy Robertson. There's just so much value in the side, it's actually unfair on the rest of Europe.