Fantasy Premier League: The 10 Players Who Scooped Man of the Match in Gameweek 4

​This Fantasy Premier League nonsense takes it out of you, doesn't it?

Four gameweeks have come and gone and I feel as if I have aged four years, but not to worry, it's time for some rest and relaxation as everyone's favourite (or not so) time of year is upon us - the international break.

On the above scale, how is your Gameweek going?#FPL pic.twitter.com/Dp5VhwLMiu

Has the break come at the right time for your squad or has it come just as you were building some momentum?

Whatever bracket you fall into, this weeks man-of-the-match round-up is here for you to once again make you want to change your entire team over the next fortnight. Oriol Romeu put in one of the strongest central midfield performances you will see as Southampton heaped more misery on Ole Gunnar Solsjaker's Manchester United.

I'll be straight with you, he's not going to bag your FPL team 20 goals, but if you've got a spare £4.5m lying around then he's certainly better than throwing a random youngster in there that is going to play a combined 14 minutes across the entire season.

Callum Robinson bagged his first ​Premier League goal for Sheffield United as he helped the Blades to an excellent comeback at Stamford Bridge.

Robinson plays predominantly as a forward but you can beat the system and snatch him up as a midfielder for a mere £5.3m

Own up, what wizards knew that the Ghana international was suddenly going to turn into a consistent goalscorer?

On the other side of the field, those of you that own any Crystal Palace defenders may want to give VAR a ring and say thanks after it ruled out Aston Villa's injury time equaliser.

​Jamie Vardy has started filing those invites for his parties again.

The former England international has started the season in fine form and looked on top of his game when bagging a brace this weekend.

Vardy's price has already jumped to £8.9m but with him looking as good as ever, expect him to be added to a few more teams during this fortnight break.

It is of course easier to not draft the Argentine in 2019 with Pep Guardiola's love of rotation but he's almost worth it, even if he does start on the bench.

Guaranteed goals, what more can you say? 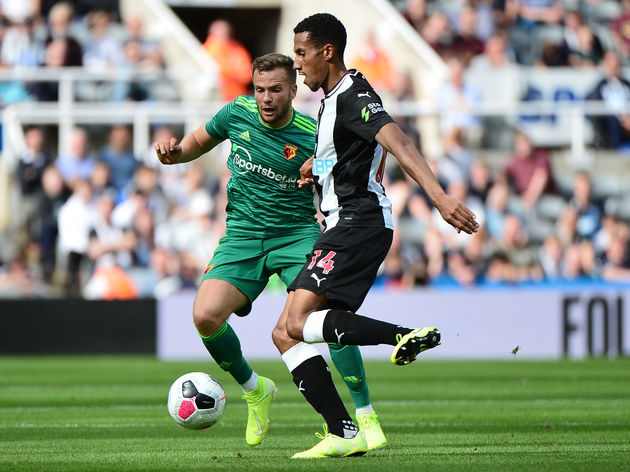 Didn't expect that one, did you?

Tom Cleverley played a vital part in Watford's opener and had the best passing accuracy out of anyone on the pitch.

I'm not going to tell you to dash to put Clevdinho in your squad but he is available at £4.9m, if you fancy.

When Yarmolenko ran to celebrate his goal with the medical team.

Not a dry eye in the house  pic.twitter.com/vseyLkuzLq

Andriy Yarmolenko marked his return from his eight month spell on the sidelines with a goal and an all round fine performance.

If you want to get a good player at a very good price, get him in now. Available at a mere £5.9m following his injury, I doubt he'll be sticking around at that price for long.

​Roberto Firmino - the man with a smile brighter than my future.

Firmino became the first Brazilian to score 50 goals in the Premier League and that tally looks to increase significantly as the season progresses.

​​From one Brazilian on Merseyside to another.

After an extremely impressive debut campaign with ​Everton, Richarlison has started this season off slowly by his standards but he made up for that with an excellent brace against Wolves on Sunday.

Hands up if you were one of the 110,519 players that transferred him out?

He's here, he's there, he's every *insert bad word here* where - and that's not just because he looks like David Luiz's long lost twin.

Matteo Guendouzi was the stand out performer in what turned out to be the game of the weekend. He was an imposing figure in the middle of the park for ​the Gunners and not just because of the hair. Sorry, no more hair jokes.

Seriously, though, it was an assured performance from the 20-year-old Frenchman and if he can replicate that throughout the season you'll not find a bigger bargain anywhere. Available at the lowly price of £4.5m, go get him, now.

Right, so that's it then - international break. Now what?

See you in two weeks when all my players have suffered season ending injuries whilst representing their respective countries.