​A late Thomas Partey strike completed a remarkable comeback from Atletico Madrid and  Wanda Metropolitano, as Diego Simeone's men recovered from a two-goal deficit against SD Eibar to make it three wins from three in La Liga.

The visitors' opener came through Charles Dias, back in the starting lineup for the first time this season. A long ball over the top caught the Atleti backline sleeping, with Pedro Leon and Fabian Orellana linking up to float in a dangerous ball from the right, and the veteran forward was all too happy to put his head on the end of it and get things off to a flying start.

And shortly after Diego Costa fluffed a glorious opportunity to level things up, the returning striker was left rueing his mistake, as the visitors doubled their money. Another ball in from the right caused confusion in the home ranks, and after they failed to properly clear their lines, the marauding left-back hammered in a hopeful effort from range that squeezed past Jan Oblak.

Just when I thought Nothing else will surprise me this weekend, Atletico Madrid drink two goals vrs Eibar in less than 20 minutes 

​Atletico weren't about to take the surprise deficit lying down, however. Through the encouraging combination of Diego Costa and Joao Felix - the former out-muscling the entire Eibar backline before cutting back to furnish his teenage contemporary with a tap-in - they pulled one back before half time, and they found themselves level within five minutes of the restart when substitute Vitolo stroked home.

The remainder of the second half was something of a war of attrition, with the visitors quite happy with a point and the home side content to revert back to plan A and control the game. Just as it looked like seven points from nine would have to do, substitute Thomas Partey took it upon himself to burst through the defence, and steer a wildly bouncing loose ball past Dmitrovic with aplomb - sparking scenes of joy and relief all around the stadium.

The enigmatic Diego Costa made his return to the starting lineup just in time to stand in for Alvaro Morata, who ​picked up a knee injury in training during the week. He was one of three changes, as Marcos Llorente came in for Thomas Partey and Renan Lodi came in for Stefan Savic, as Diego Simeone reverted to his standard 4-4-2.

The result of the changes was certainly a questionable start, with the back four often looking like four strangers incapable of communicating with one another, but once they got going, it looked like the regimented, dangerous Atletico we all know and love. 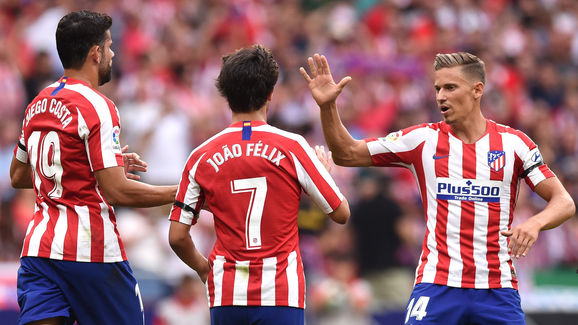 Vitolo once again made a case for a place in the starting XI, while the combination of Koke and Saul in the heart of midfield for the second half is something Simeone may be keen to revisit given the flair and vibrancy they offered as a duo.

There was also encouraging signs with the front two, and while it was a quiet game by Felix's lofty standards, the teenager was still able to get himself off the mark in the league, which will serve his confidence well heading into his first international break as an Atleti player.

They made it difficult for themselves, but in the end they showed the sort of grit and desire we all associate with a Simeone side, and made it three wins on the bounce to start the season.

After a controversial end to last season that left him looking set for the exit door, the talismanic frontman was back in the starting XI after recovering from a thigh injury, and you wouldn't have known he'd been gone.

In a difficult first half for his side, he was in amongst it, and after missing a glorious chance to level things up at 1-0, his assist for Felix - rampaging through the otherwise solid Eibar backline before selling the keeper out with a perfectly weighted square pass - was Diego Costa at his  very best.

The second half saw him continue to bully centre-halves as if his life depended on it, and while he didn't get the goal his performance deserved, he put La Liga on notice that he is back. Both sides, of course, have the international break to catch their breath, with Atletico facing a gruelling double-header with Real Sociedad and Juventus when they return.