Crystal Palace got their first home goal and first home win of the season courtesy of Jordan Ayew's 72nd minute strike against ten-men Aston Villa, who had Trezeguet sent off.

After more than an hour of peppering the away side's goal, it was looking increasingly likely that Palace would draw another blank in front of their home fans.

That was until Ayew was released by Luka Milivojevic and squeezed past Tyrone Mings and Jack Grealish, curling the ball low into the bottom corner.

Villa were struggling to get a hold in the game even before Trezeguet's sending off. Two yellows either side of half-time saw the Egyptian given his marching orders, with a clumsy and late challenge on Wilfried Zaha after 53 minutes being one foul too many for referee Kevin Friend.

Whatever the numbers on the pitch, the home side dominated but repeatedly failed to find a way through. Tom Heaton pulled off a remarkable save to deny a curling long-range effort by Miliovejic, while James McArthur and Cheikhou Kouyate both failed to put the ball in the net from close range.

The game ended in controversy, however, as Henri Lansbury's late goal was chalked off when the referee controversially penalised Jack Grealish for simulation in the build-up. 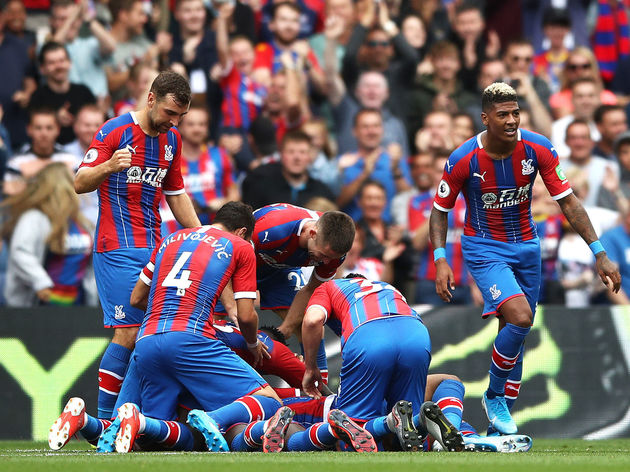 Will it finally begin to click at home for Crystal Palace? Goalless draws against Everton and Colchester continued last season's bafflingly poor record which saw them win only five of their 19 home league games.

They really brought the performance when needed on Saturday, however, and it will be encouraging to manager Roy Hodgson that members of his squad other than Zaha stepped up to ensure Palace won.

Impressive performances from Milivojevic, Ayew, Jeffrey Schlupp and McArthur drove them to victory, just as another 0-0 result was looking inevitable. Zaha improved as the game went on and his quick feet led to Trezeguet's red card, but the south Londoners were not reliant on him to pull something special out the bag.

STAR PLAYER - Jordan Ayew and his not-too-hot record was seen as something of a joke by some fans and it's fair to say Crystal Palace supporters weren't overwhelmed with excitement when he joined the club.

However, he now has two goals in two games and fizzled with energy and excitement in the second half. By the time of his goal, Villa simply couldn't handle him. Have we all misjudged the dormant talents of Palace's front man? Aston Villa turned in what surely must be their poorest performance of the season so far, and Dean Smith will be worried how limp they looked. Even in defeat they gave Tottenham and Bournemouth good games, but they utterly failed to turn up on Saturday.

Wesley's hold-up play left much to be desired, while Jota and Trezeguet - when he was on the pitch - failed to conjure up any magic. In order to stay up, Villa will have to pick up points away from home but on this evidence they have much to improve upon.

Things may have been different if not for Kevin Friend's harsh decision in stoppage time to deny Lansbury's goal.

STAR PLAYER - The scoreline could have been much worse without Heaton. Multiple saves which demonstrated either his cat-like reflexes or incredible long reach kept Palace at bay for most of the game.

With Mings and Bjorn Engels in front of him, Villa fans can at least be encouraged by some really good performances this season by their final line of defence.

Honestly think the strength of our centre back pairing plus Heaton will be enough to keep us up this season barring any injury. Not quite so sure on full backs although Guilbert looks exciting going forward. Good 3 in midfield. Flanks maybe a little weaker but think we'll be ok.

Crystal Palace have a London derby against Spurs when the Premier League returns from the international break, while Aston Villa will entertain West Ham in that weekend's Monday night game.