Sheffield United earned a fantastic point in the Premier League on Saturday afternoon, as they drew 2-2 with Chelsea at Stamford Bridge.

After​ a largely uneventful opening to the game, Chelsea opened the scoring with their first chance of the game through Tammy Abraham. His initial header was saved by Dean Henderson, but as the Blades goalkeeper spilled the ball Abraham pounced on the rebound and fired home.

Abraham made it two for the Blues two minutes before half time, once again taking advantage of some poor defending. Some bad communication saw John Egan and Jack O'Connell both attempt to head the ball, and it was put on a plate for Abraham who swept it home for 2-0.

With not even a minute on the clock of the second half, Sheffield United got themselves back into the game thanks to Callum Robinson. Enda Stevens perfectly pulled it back for a free Robinson, who smashed the ball past Kepa Arrizabalga to give the Blades a glimmer of hope.

Sheffield United were on top in the second half, as they fought for an equaliser and a huge point. They deservedly levelled it up with one minute to play, as Robinson's cross was guided into Arrizabalaga's net by Kurt Zouma, as the Blades earned a huge point at the Bridge. After earning their ​first win of the season at Norwich last week, ​Chelsea were keen to make it two in a row on Saturday. They started well, and after strong spells of possession scored twice from two defensive mistakes.

The Blues were impressive going forward, but conceding straight after the restart sums up their defence. Their vulnerability at the back was once again exposed, and as soon as the visitors got on the scoresheet Chelsea were chasing the ball, remarkably fighting to hold onto their lead.

The change from the first half to the second half was worrying, as Chelsea went from dominating to being on the back foot. The Blues went on to concede right at the death, throwing away a massive three points in a pathetic defensive performance on their own turf.

STAR MAN - Tammy Abraham once again had a fantastic game. Two chances from two mistakes was all he needed to get a first half brace, as he was clinical as ever to make it four goals in his last two appearances for the Blues.

When chances came calling Abraham took them, and his hold up play and good passing in the final third combined with his goals saw him produce an excellent performance. The Englishman can be very happy with his afternoon, as he continues to embrace the famous number nine. 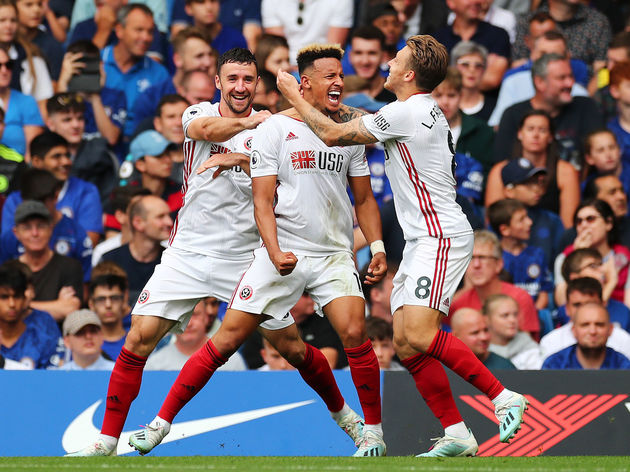 ​Sheffield United came to Stamford Bridge with a big ask, as they looked to win in SW6 for the first time since October 1992. Their first half performance was very sloppy, with two unnecessary defensive errors gifting Chelsea a two-goal advantage, as the game looked beyond the Blades.

However, they didn't lose hope and deservedly got themselves back into the game straight after the restart. From then on Sheffield United were on top and dominating, fighting as hard as they could and eventually scoring a hugely deserved equaliser.

It is a huge result for the Blades and a massively deserved point away to a top six side, in a historic day for them. Chris Wilder will be delighted with their fight, spirit and determination at Stamford Bridge, as Sheffield United came back to stun the hosts in an outstanding display.

STAR MAN - It was a goal and an assist for Callum Robinson, who led United's comeback in style. He kicked off the second half with his first Premier League goal and then was responsible for the cross that set up the equaliser, as Robinson put in a superb shift. With the first international break upon us, it's two weeks before either side are back in action. Chelsea travel to Molineux to face ​​Wolves on 14 September, before they host Valencia in their Champions League opener at the Bridge three days later.

Sheffield United are back at Bramall Lane on 14 September, when they host ​Southampton. The Blades then travel to Merseyside the following weekend, facing ​Everton at Goodison Park on 21 September.