Ansu Fati: 7 Things to Know About the Latest Barcelona Wonderkid After His La Liga Debut

With Lionel Messi, Ousmane Dembele and Luis Suarez all sidelined through injury, Barcelona handed a debut to 16-year-old academy starlet Ansu Fati​ in their 5-2 win over Real Betis.

The teenager has enjoyed several impressive years in academy football, but his impact on the senior game has been incredibly limited. As a result, he's not exactly a household name.

If you haven't heard much about him, you're in luck. Here are seven things you need to know about Fati. At 16 years, nine months and 25 days, Fati became the second youngest player to ever make a ​La Liga appearance for the Blaugrana, falling just 20 days short of breaking the record.

However, he was nowhere near becoming the club's youngest ever player. That record belongs to Albert Almasque, who turned out for Barcelona shortly before his 14th birthday in 1902.

He Once Turned Down Real Madrid

Fati's father, Bori, admitted to ​COPE that they snubbed Real's advances earlier in the forward's career. When he was a nine-year-old as part of the Sevilla academy, Fati only wanted Barcelona, and that's what he got.

Sevilla weren't happy about it and forced him to spend a year on the sidelines, but that was all worth it for Fati, who eventually sealed his dream move to Camp Nou.

He Almost Left Over a Lack of Progression 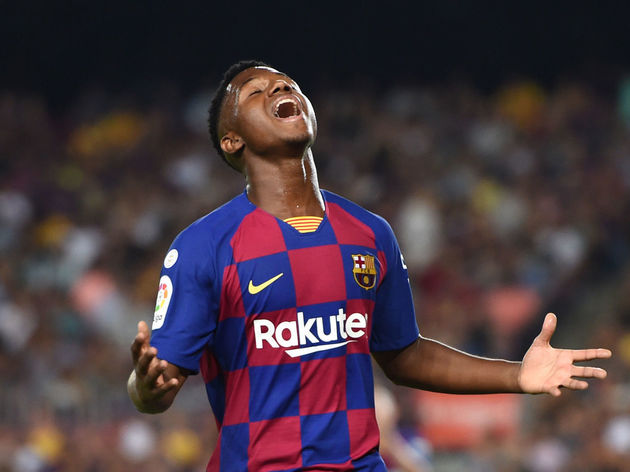 Fati was actually out of contract this summer, with both he and his father believed to have grown frustrated with the lack of progression at Camp Nou. He felt he deserved to be accelerated towards the senior side, and Barcelona eventually agreed.​

However, there was a time when Fati's future was up in the air. He came close to walking away this summer, and ​Borussia Dortmund, ​Manchester United and ​Newcastle United were all keen to sign him up.

He always wanted to remain with Barcelona, but he didn't want to spend a year in the academy. He wanted a promotion to the B team, and it looks like he got it.

Barcelona Needed His Parents' Permission to Play Him

Being handed his first-team debut will undoubtedly be one of Fati's favourite moments in his career, but Barcelona actually had to ask for permission from his parents to play him. That's how young he is.

La Liga regulations state that young players are not allowed to play in late-night matches without specific authorisation from the parents, so Barcelona had to reach out to Fati's family to get permission. Understandably, they didn't hesitate to say yes.

Imagine your parents saying you weren't allowed to make your debut for Barcelona because it was past your bedtime. Lucky for Fati, that's not what happened.

He Overcame a Broken Leg

It looks like Fati has already been through a lot in his young career, and one of the lowest moments was undoubtedly his horrific double leg break.

Back in December 2015, a tough tackle from an Espanyol defender left Fati with a broken tibia and fibula in his right leg, forcing him into a ten-month period on the sidelines. That injury came just after he had finally been allowed to join the club after their transfer ban was lifted, so a young Fati spent plenty of time without competitive football.

Fortunately, fans will tell you that this was probably the turning point in his career. His passion and determination only grew, and he came back with a point to prove. He dominated youth football, and continues to do so to this day.​ So, on to his play style. If you look at the statistics - 56 goals in 29 games in his debut season - you'll see that Fati is a goalscorer. That's hardly surprising, since pretty much all he does is shoot.

Some have criticised Fati for his perceived selfishness on the pitch, as he will often snub a good pass in favour of a poor shot. Plenty of his shots will go in, but there are hundreds more which go flying off target.

Barcelona are happy for him to keep firing, because they know he will score goals. However, as he grows older, you'd expect things to change a bit.

But He Does Love a Good Pass

On the infrequent occasion that Fati looks for a pass, he's actually absurdly good at picking one out.

His time as a winger or a creative midfielder has helped the 16-year-old perfect his passing skills, and he is certainly capable of pulling the strings all over the pitch. The Barcelona influence is clear to see in Fati, who has developed a thoroughly versatile game.

Don't expect to see Fati dropping deep to create for his teammates, but just know that he is capable of doing so if he wants to. Simply put, when Fati wants to do anything on the pitch, there aren't many youth defenders who can stop him.​