Barcelona sealed their first win of the season in style on Sunday night, as they beat Real Betis 5-2 at the Camp Nou.

Barcelona had a flurry of chances in the opening 15 minutes, coming withing inches of taking the lead. Yet it was Real Betis who struck first, as out of nothing Loren Moron put Nabil Fekir through on goal, who coolly slotted home to give them the lead with their first chance of the game.

Barca kept pushing for a goal, but couldn't capitalise on their shots on goal. Barcelona finally drew level four minutes before the break, as Antoine Griezmann scored his first Blaugrana goal. Sergi Roberto floated the ball into the box, and Griezmann poked it home to introduce himself to the Camp Nou crowd and level it up going into the break.

Barca turned it around straight after the restart, as Griezmann got his second of the night. The Frenchman picked up the ball on the edge of the box, controlled it and delightfully curled it into the far corner to put the hosts in front.

With the Blaugrana well and truly in the mood, Carles Perez made it three with a wonderful finish to score his first goal. Jordi Alba added another one minutes later, as Sergio Busquets' pass cut open Betis' defence, leaving Alba to sweep it home to well and truly put the game beyond Betis.

Substitute Arturo Vidal got on the scoresheet as well, smashing his effort into the roof of the net. Betis then pulled one back in style, as Moron scored a stunner as he smashed the ball into the top corner. However Barca saw out the win, sealing the three points in style at the Camp Nou. 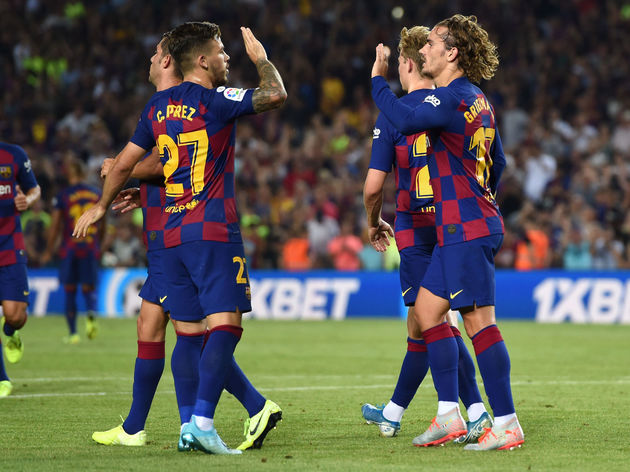 After a devastating ​1-0 defeat to Athletic Club on the opening night, ​Barcelona had to respond in style in their first home game. It was a frustrating first half for the reigning champions, who went behind to Betis' first effort and missed a flurry of chances before drawing level before the break.

Barca knew that they had to up their game in the second half, and to say they did would be an incredible understatement. The Blaugrana scored a stunning three goals in ten minutes, tearing the visitors apart and playing beautiful football to seal the win with a wonderful performance.

There were question marks about how Barca would deal without both ​Lionel Messi and ​Luis Suarez, and while at first they struggled they truly hit their stride in the second half. It was beautiful, vintage Barca football, as the champions got their season well underway in Catalonia.

Coming in clutch on his Camp Nou debut... 

STAR MAN - In a stunning performance, Antoine Griezmann stole all the headlines with his brace on Sunday. The Frenchman scored two wonderful goals and led the Barca attack brilliantly, creating numerous chances and linking up excellently with his teammates.

The Frenchman produced a breathtaking performance at the Camp Nou, as he introduced himself to his new supporters in style. 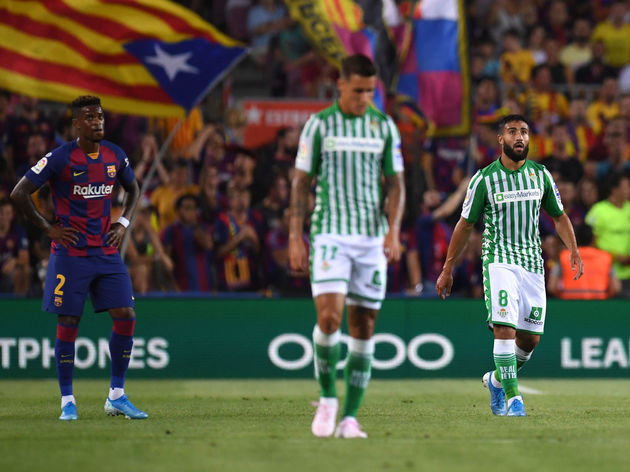 Barcelona take the trip to Pamplona next, as they meet Osasuna next Saturday. The Blaugrana return to the Camp Nou after the international break for an exciting tie, as they host Valencia in a repeat of the Copa del Rey final on 14 September.

Real Betis have back to back home games up next, starting with the visit of Leganes to the Benito Villamarin next Saturday. The Verdiblancos are back at home two weeks later on 14 September, when they host Getafe in Andalusia.