Nicolas Pepe has been forced to wait patiently for his full Arsenal debut having made his club-record £72m move from Lille during the summer.

Working his way to full fitness, the Ivorian had been limited to two appearances from the bench in the Premier League thus far. That all changed on Saturday though, as Unai Emery thrust the forward into the club's starting XI for their huge clash at Anfield.

50 - Nicolas Pepe has become the first player to successfully dribble past Virgil van Dijk in the Dutch defender's last 50 appearances in the Premier League, since Mikel Merino in March 2018 for Newcastle. Beaten. pic.twitter.com/B1oRZMciOB

It didn't have the desired effect, however, as the ​Gunners slumped to a 3-1 defeat courtesy of a ​Mohamed Salah brace and Joel Matip header. Lucas Torreira made the scoreline slightly better reading for the traveling fans with a late consolation, but it was too little too late for Emery's side.

There might have been a different outcome had the lightening quick Pepe finished off a one-on-one chance in the first half, as he raced clear of the ​Liverpool defence in a blistering counter-attack.

However, even earlier than that ​Opta revealed in the seventh minute Pepe broke a 50-game long hoodoo when he actually dribbled past Virgil van Dijk on the right wing. 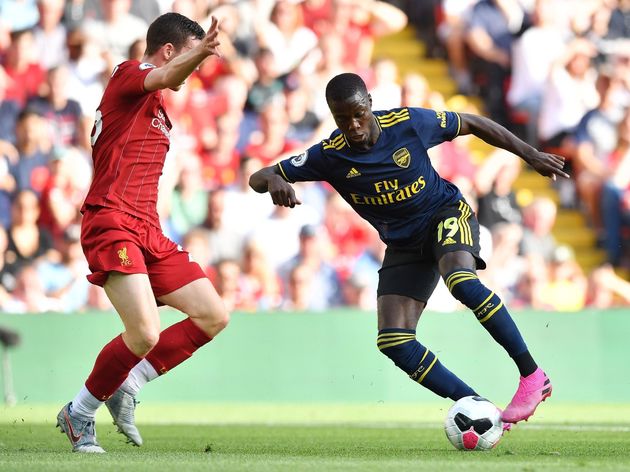 Incredibly, the Dutch defender had not been dribbled past in a ​Premier League since March 2018, when Mikel Merino did so for Newcastle.

The towering centre half is among the leading candidates the Ballon d'Or this year, with stats such as that underlining his immense qualities in the heart of the defence.

Despite the loss, it offers some positive signs for Emery, who will have been pleased with Pepe's direct approach to the game in one of the more reassuring notes from an otherwise disappointing defeat.

Certainly a player to get people off their seats, Pepe