​The new Serie A season kicks off this weekend, with Milan preparing for their first league game of the season against Udinese at Stadio Friuli on Sunday afternoon.

After missing out on a top-half finish last season, Udinese will be aiming to build on their 12th place finish. The Zebrette have already begun their season in good form, qualifying for the Coppa Italia fourth round with a 3-1 win over Sudtirol.

Milan's fifth place finish last season gives the Rossoneri a strong objective of a top four finish, which they missed out on by one point. However, they will be without European football this term after they were banned for one year after breaking financial fair play rules.

 #SerieATIM 2019/20 ⚽
The new season is about to kick off Rossoneri, are you ready? Start counting down: -7⃣ ⏳
Mancano 7 giorni all'inizio della nuova Serie A: siete pronti, rossoneri? -7⃣ ⏳ pic.twitter.com/6TPvOQVhWP

Here's our preview of Sunday's ​Serie A clash. ​Udinese are without defender Sebastien De Maio, who is sidelined with a hamstring injury. The centre back, who joined on a permanent basis from Bologna this summer, made 16 appearances last season but will miss the start of the new campaign.

Mattia Caldara is still a long-term absentee for ​Milan after rupturing his cruciate ligament in May, and is not set to return until November. Theo Hernandez will also be unavailable until mid-September, after picking up a serious ankle injury during pre-season. 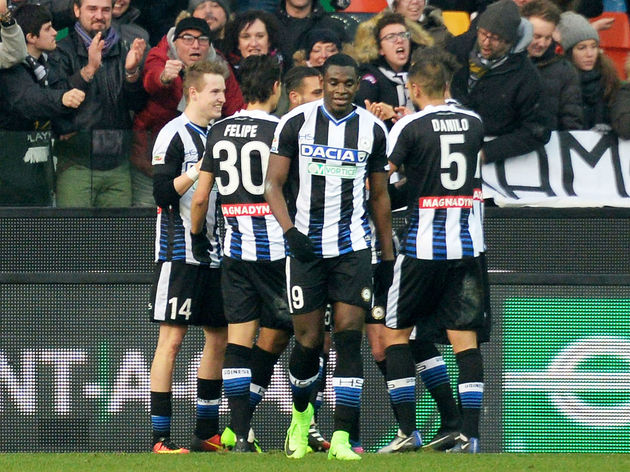 ​This will be the 57th meeting between Udinese and Milan, as the Rossoneri aim for their 28th win while the Zebrette will be going for just their 16th. Their last meeting came in April, as Kevin Lasagna cancelled out Krzysztof Piatek's opener in a 1-1 draw at San Siro.

Udinese haven't won in their last four meetings, last beating Milan back in January 2017. They have lost two of their last seven home games against the Rossoneri, who last kept a clean sheet at Stadio Friuli in May 2011 in a 0-0 stalemate. ​Udinese's Coppa Italia win was a great way to kick off their domestic season, which set up a fourth round tie against Bologna in December. After losing back to back pre-season games, the Zebrette finished off their season preparations with wins over Besiktas and San Luigi.

Milan didn't have the best pre-season, only winning one of their last five games. This included narrow defeats to ​Bayern Munich and Benfica, as well as a penalty shootout loss to ​Manchester United at the start of August. Milan ended last season on a stronger note, but going into the new season results haven't shown much promise for the Rossoneri. Meanwhile, Udinese produced some decent displays, and having already played their first competitive game they will be sharper and stronger.

With the home advantage and the advantage of already starting their season, Udinese can snatch a victory at the Friuli. It would be the perfect start for the Zebrette but a concerning one for the Rossoneri, but anything could happen on Sunday as Serie A returns for another season.