Manchester United player's alleged Fantasy Premier League table has been revealed, and there is a surprising figure sitting atop the leaderboard as it stands.

The 2019/20 FPL season began, naturally, almost a fortnight ago alongside the start of the 2019/20 Premier League season, and both fans and players have set up their teams for the campaign ahead.

And, as relayed by the Daily Star, the 20-time champions are no exception, with a nine-man league entitled 'The MUFC Tiki-Taka Fantasy' apparently set up. 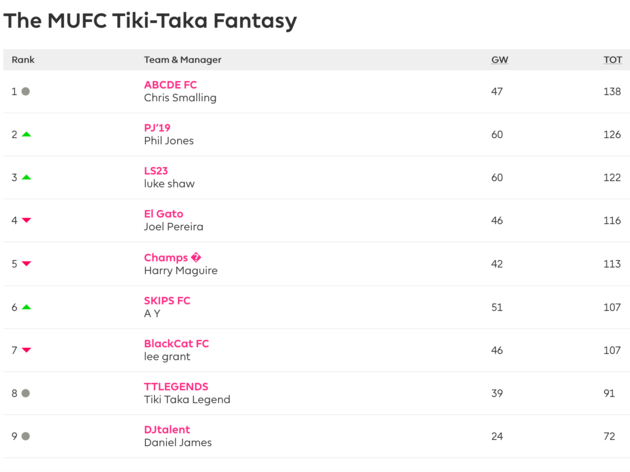 Surprisingly, it is the oft-scoffed at duo of Smalling and Jones who currently top the rankings, with the former 12 points ahead of his compatriot on 138 points. The Englishman's team name is an inspired(?) ABCDE FC, while Jones has opted for the classic PJ'19.

Luke Shaw, who sits in third position just four points behind PJ, has gone for a similar formula, except the number denotes his Red Devils shirt number. New boy Daniel James, who opened his United account in real life on his debut appearance with the fourth goal in the win against Chelsea, is currently languishing at the bottom of the pile with a meagre 72 points.

The one unknown quantity is Mr 'Tiki Taka legend' himself, but his picks of Aaron Wan-Bissaka, Anthony Martial and Andreas Pereira could shed some light... Unless, that is, he's as wise/bad as Chris Smalling, and has duly snubbed himself.

More info as it develops, I guess.