Arsenal: The XI That Should Start Against Liverpool

It's a fixture that all Arsenal fans dread when the games are announced. And rightfully so, with the Gunners still having nightmares from their previous visits to Anfield, where they have conceded at least three goals in all four of their last top-flight visits to Liverpool​.

After securing their best start to a Premier League season in ten years, albeit only narrowly seen off Newcastle and Burnley thus far, a real test awaits them as they travel up to Merseyside on Saturday evening.

Both sides remain the only two outfits with 100% records in the league so far, but with that stat set to change this weekend, how could Unai Emery lineup his side to ensure its ​Arsenal who emerge from the game top of the pile? This is how the Spaniard could set his team up for the crunch clash. Bernd Leno (GK) - Hardly a topic of debate, Leno has become a key figure in this Arsenal team having overthrown Petr Cech as the club's number one last season. The German has improved massively since his first outing for the Gunners, with his shot stopping ability set to be tested to the limit on Saturday.

Sokratis (CB) - Last season Sokratis was the best of a bad bunch at Arsenal. Solid at times, the Greek defender is still susceptible to the odd mistake, but alongside fellow experienced centre half Luiz he looked more comfortable against the ​Clarets.

David Luiz (CB) - One thing Arsenal fans have been crying out for is a leader in the side. ​David Luiz still has question marks over his knack of dropping a clanger or two, but he certainly will look to marshal a defence that has failed miserable to contain the Reds at Anfield in recent seasons.

Nacho Monreal (LWB) - When Kieran Tierney returns to full fitness, Monreal's role in the side is likely to be a peripheral one. However, until that time, the 33-year-old will continue featuring at left back with Sead Kolasinac lacking match fitness having not started the last two games. 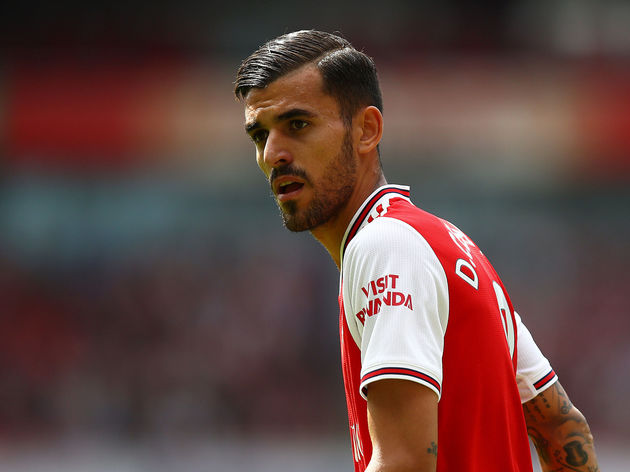 Granit Xhaka (CM) - With Lucas Torreria not ready to start matches, Xhaka could be thrust back into the starting XI having sat out the last game due to injury. A divisive figure among Arsenal fans, his aerial presence could be needed when defending set pieces, but he will need to be careful in possession due to ​Liverpool's intense pressing of the ball.

Matteo Guendouzi (CM) - The young Frenchman is a star in the making having been plucked from Ligue 2 obscurity. Neither a holding midfielder nor an attacking one, his role in the side will be to bridge the gap from defence to attack as the Gunners will look to use their pace on the counter attack.

Dani Ceballos (CAM) - Man-of-the-match against Burnley thanks to two assists and an all-round outstanding display, Ceballos looks likely to get the nod in the more advanced role in the midfield three. Emery will be hoping for a similar performance to the one at the Emirates if Arsenal are to stand any chance of leaving Anfield with a positive result. Pierre-Emerick Aubameyang (ST) - ​Aubameyang has demonstrated his Golden Boot winning season last campaign was no fluke as he already bagged himself two in as many games so far in the Premier League. His pace will prove crucial for Arsenal on the break, with Liverpool likely to have the Gunners pegged back for much of the 90 minutes.

Alexandre Lacazette (ST) - One half of Arsenal's deadly front two, ​Lacazette prefers to drop deep and link play up compared to his Gabonese strike partner. Willing to do so, it offers Aubameyang chance to run in behind, while the Frenchman himself is a lethal finisher inside the penalty box.