​Wolves travel to Turin on Thursday where they will face Torino in the first leg of the final hurdle before the Europa League group stages.

European football has been easy going for Nuno Espirito Santo's side so far. However, they will face a much more difficult challenge when they come up against the side who came seventh in last season's Serie A. Torino's run in Europe has been almost as comfortable as Wolves'. Walter Mazzarri's side are also yet to start their domestic campaign, meaning they will be fresh for Thursday's fixture.

Check out 90min's preview of the first leg below.

Wolves will be frustrated with the Premier League​ fixture schedule. Their Monday night draw with Manchester United has given them just three days to travel to Italy and prepare for the play-off.

Luckily for Nuno, as he rarely likes to change his starting lineup, the Wanderers have no injuries in their squad. However, after much of the first team played almost the full 90 minutes at Molineux on Monday fatigue could come into play. As for Torino, right-wingers Vittorio Parigini and Simone Edera will both be out of action, leaving Mazzarri with questions to ponder on the right side of his midfield. However, if he chooses to act with a back five Lorenzo De Silvestri can slot into the right wing-back position

Aside from that, Il Toro may be lacking in match fitness due to their lack of domestic football, meaning they could be forced into early substitutions.

This will be the first time that these two side will have met and will be an extremely important match for both clubs.

The only Italian side that Wolves have faced was ​Juventus back in the 1971/72 UEFA Cup quarter finals. The first leg ended in a 1-1 draw before a 2-1 home win at Molineux sent Wolves into the semis of a tournament that Tottenham would eventually win. 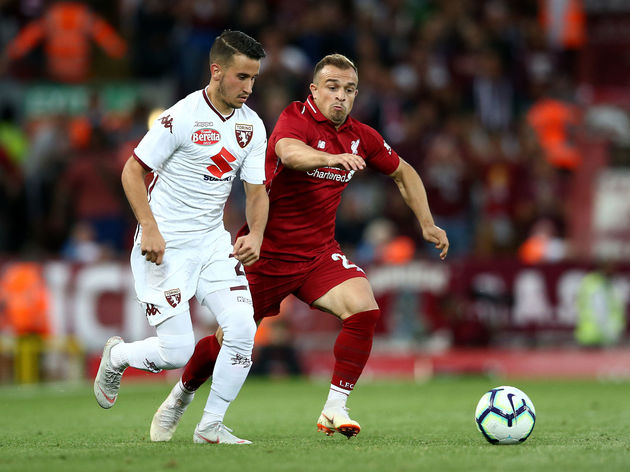 In more recent years, Torino faced off against English opponents in friendlies during the summers of 2017 and 2018. A 2-2 draw with Huddersfield Town in the former was followed by a 3-1 loss to Liverpool in the latter. ​

Wolves have yet again had a strong start to the season. A 0-0 draw away with a very impressive looking Leicester in their Premier League opener was followed up by a 1-1 draw at home to ​Man Utd.

A characteristic screamer from Ruben Neves​ that curled past David de Gea once again highlighted the quality of the current Wolves side, who could quite comfortably progress to the latter stages of this season's Europa League. Torino were held away at Shakhtyor, but won the first leg 5-0, so in pretty emphatic fashion.

Torino shouldn't actually be in this season's Europa League after they finished seventh in the 2018/19 Serie A and Lazio grabbed the last qualification spot by winning the Coppa Italia. However, they qualified after ​AC Milan were expelled from the competition.

​Wolves are likely to be completely fatigued after the amount of football they have played recently and could be run ragged by ​Andrea Belotti. This said, the talent at Nuno's disposal is immense and moment of magic is never far away from this Wolves side. Torino will be the fresher of the sides, however, without playing against top opposition since the close of last season they could be slightly rusty.