Alonso had been heavily linked with a move to Real Madrid, but the lure of working under Benitez proved too strong for Alonso who, like fellow countryman Luis Garcia, headed to the Costa del Anfield.

The brilliant duo went on to make a massive impact at Anfield 🇪🇸 pic.twitter.com/YzP8GCwgTu

Upon Alonso's arrival, Benitez said (via ​BBC Sport): "Xabi is very clever. He is good with long and short passes. He has more skill than strength. He is intelligent and will play well."

It's safe to say that that was somewhat of an understatement from the boss.

His arrival signalled a change in style for ​Liverpool who, with a 22-year-old Alonso in charge of the midfield, transitioned into an incredibly technical team. His metronomic passing skills earned praise from English fans almost immediately, and it just got better and better for the player. 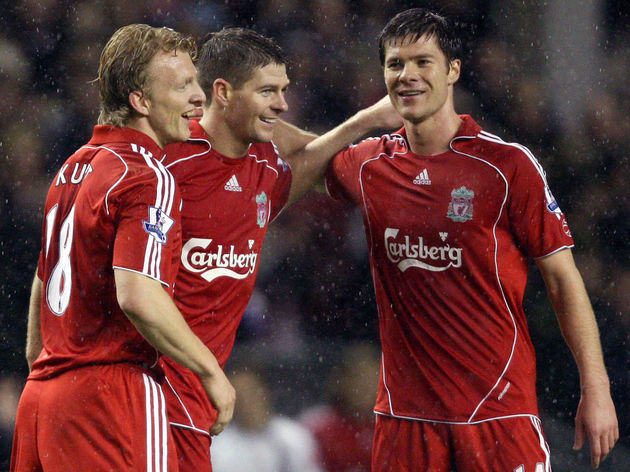 Alongside Steven Gerrard, Alonso formed one of the most revered partnerships in ​Premier League history. The pair could defend, they could attack, and they could pass the ball about as well as we have ever seen.

He made Liverpool infinitely better, and their ​Champions League glory in his debut season was the ultimate proof.

With the Reds trailing 3-0 to ​AC Milan in the final, Alonso took control of the game and helped steer Liverpool back on track. With the tie at 3-2, he stepped up to take a penalty to bring the game level. He may have missed, but he fired home the rebound to keep Liverpool alive.

Simply put, Liverpool would not have won that game without him, and fans won't hesitate to let you know that.

My hero. My mate. pic.twitter.com/qFmO53EQvl

His second season did not yield as impressive results, but Alonso still helped Liverpool lift the FA Cup at the end of the year. Again, their success could be attributed to the Spaniard, whose two outrageous, long-range strikes in a third-round tie with ​Luton Town helped them to a dramatic 5-3 win.

He soon one-upped himself with an even better strike from distance, netting from inside his own half in a 2-0 win over ​Newcastle United in 2006, but that's just what Alonso did. He could do whatever he wanted with the ball at his feet, and he regularly did so.

Injuries often disrupted his time at Anfield, but they usually came about purely because of Alonso's determination to play as much as possible. He ran himself into the ground for Liverpool, often paying a hefty physical toll.

He was eventually sold to ​Real Madrid for around £30m in 2009, and Liverpool initially struggled without him. The Reds had become so accustomed to his playmaking, that operating without him was a near impossible task.

Everything he did was so composed, so excellent and just straight-up cool. He played his way into Anfield history, and will forever be remembered for his undying love for Liverpool.