After a relentless opening 20 minutes where Atletico dominated their opponents, Alvaro Morata headed them in front from Kieran Trippier's cross – the English debutant delivering a wonderful ball which Morata simply had to guided into the bottom corner.

Things went from bad to worse for Getafe minutes before half time when captain Jorge Molina was shown a straight red card after a VAR check. Molina was originally booked for an apparent stamp on Thomas, but was instead sent straight off after a VAR check from referee Guillermo Cuadra Fernández.

The numerical advantage lasted for four minutes, with Renan Lodi – a summer signing from Athletico Paranaense – soon sent off for Atleti. He was first booked for a late lunge, before receiving a second booking just moments later for jumping on Damian Suarez's back.

Atletico were awarded a penalty after the restart when Joao Felix was brought down after a spectacular run from his own half all the way into the box. Morata stepped up with a chance to double his tally for the night, but David Soria made a strong save to his right hand side to keep the scoreline close.

Getafe were far from threatening going forward, but kept searching for a way back into the game. Their best chance came in the 86th minute when Angel Rodriguez's long range hit cannoned off the crossbar. 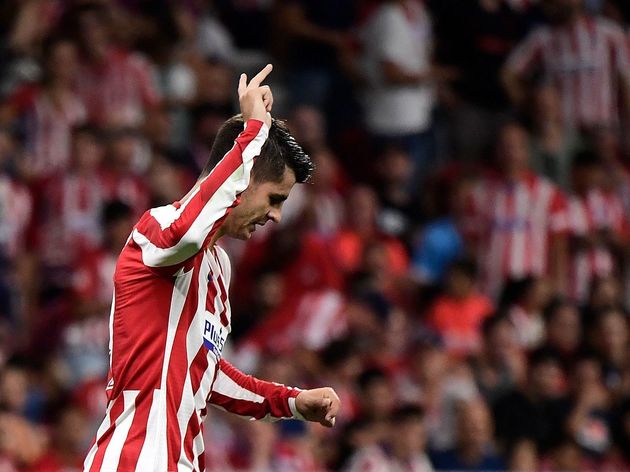 Atletico Madrid were on top and in control from the beginning, peppering the opposition goal with chance after chance. It was only a matter of time before they found the back of the net, and a nicely worked move was finished off by Morata to give the Rojiblancos the lead.

Atleti should've killed the game off when they won a penalty, but Morata's miss kept the game alive. They played very well and dominated most of the match, yet for all of their early superiority then came within a few inches of throwing away two points at Getafe began to climb over their defence in the closing stages.

The home side should've won by a greater margin, and wrapped up the win long before the full-time whistle. Nevertheless, three points to kick off Los Colchoneros' season is the perfect start, and the complaints will be limited as Diego Simeone's side got off to a winning start.

One concern? Joao Felix went off injured not long after winning the penalty with an apparent ankle injury. Something to watch out for as the week progresses.

Your face when you get an assist 23 minutes into your #LaLigaSantander debut! 浪

STAR MAN - Atleti put in a decent attacking display, Joao Felix dazzling with his skills and ​​Alvaro Morata scoring an instinctive header to win the game – but the plaudits must go to defender ​Kieran Trippier, who was the underrated man of the match.

The Englishman's work rate down the right flank was excellent, and he got a superb assist to open his ​La Liga account. The debutant was excellent in his first game in Spanish football, as Trippier was outstanding all night long at the Wanda. STAR MAN - A mediocre performance saw no real stars in Getafe's side, but goalkeeper David Soria played well in goal. He kept Atletico out for a long time and made some very good saves, including a great save from the penalty spot in a strong display in a disappointing defeat. Atletico Madrid will make a short trip across central Spain next Sunday to face Leganes, before returning home to the Wanda at the start of the new month to welcome Eibar.

Getafe have back to back home games against Basque opponents coming up, starting with the visit of Athletic Club next Saturday. That match is followed by Alaves' trip to the Coliseum Alfonso Perez.