Manchester City manager ​Pep Guardiola has described the decision to deny his side a penalty as "incredible", and the Spaniard believes that the powers-that-be "have to fix" VAR in the aftermath of the Citizens 2-2 draw with Spurs on Saturday evening.

The Man City boss was left exasperated by the decision to refuse his team a penalty when midfielder Rodri appeared to be wrestled to the ground by Spurs attacker Erik Lamela.

His frustration was intensified by referee Michael Oliver's decision to chalk-off a last-gasp winner over an apparent handball committed by Aymeric Laporte before Gabriel Jesus lashed home.

Speaking to ​Sky Sports after the match, Guardiola lamented his side's fortunes following a similar incident which occurred in the Champions League between ​Man City and Tottenham last season.

"I thought we left that situation in ​Tottenham in the Champions League last season," he said. "But it is the same. The referee and VAR disallow it. It's the second time [it's happened] - it's tough. It's honestly tough but it's the way it is.

The handball law is no longer fit for purpose

"It was incredible it wasn't a penalty in the first half [for the foul on Rodri in the box] but VAR said it wasn't and then at the end they did. I'm pretty sure people were happy today, we just need to work harder at scoring our chances."

He added, as quoted by ​the Liverpool Echo: “It happened last week with Wolves.

“We saw for Chelsea on Wednesday - the [Liverpool] keeper wasn't on his line. Adrian in the penalty shootout. They have to fix it.

“The whistle inside matches now isn't quite clear. But [the officials] believe it's hands with [Fernando] Llorente in the Champions League, and sometimes they don’t.” 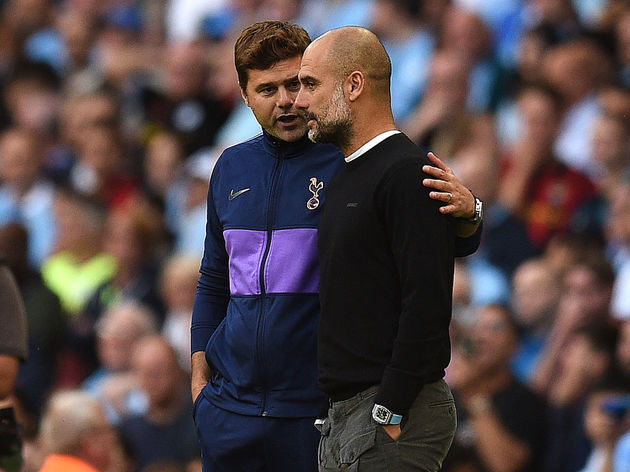 Guardiola's agony was the polar opposite to Mauricio Pochettino's ecstasy, as the Argentine boss declared his deep affection for the new technology in place.

"I am in love with VAR. I wasn't agreeing with it from the beginning when we started talking about it, but sometimes you get the benefit like today or in the Champions League."

The introduction of VAR was aiming to reduce the number of contentious decisions during matches, but it appears the technology is a long way off eradicating controversy from our ever-changing game.