Manchester City and Tottenham Hotspur played out a dramatic draw at the Etihad Stadium on Saturday night, as VAR took centre stage in the final minutes of the game...again.

Gabriel Jesus thought he'd netted the winner - with the match tied at 2-2 - in injury time, wheeling away in celebration for a couple of minutes before seeing the goal ruled out for a handball by Aymeric Laporte. City had no time to chase a winner and instead had to settle for a point.

Earlier in the day, Raheem Sterling nodded home a wonderful Kevin de Bruyne cross from the right-hand side to open the scoring, but less than three minutes later, Erik Lamela levelled - finding space and curling a superb finish beyond Ederson.

City regained their lead when Aguero got across his man and latched onto another superb De Bruyne cross. Substitute Lucas Moura equalised once again for Spurs with his first touch, but the drama took over at the end and ensured a share of the spoils.

Here's the story of the game.

Once again, VAR had a huge say in the dying minutes of a match between Man City and Spurs.

As in the Champions League last season, Guardiola's men had a winning goal disallowed in the final seconds of the match, this time for handball against Laporte in the buildup to the goal. 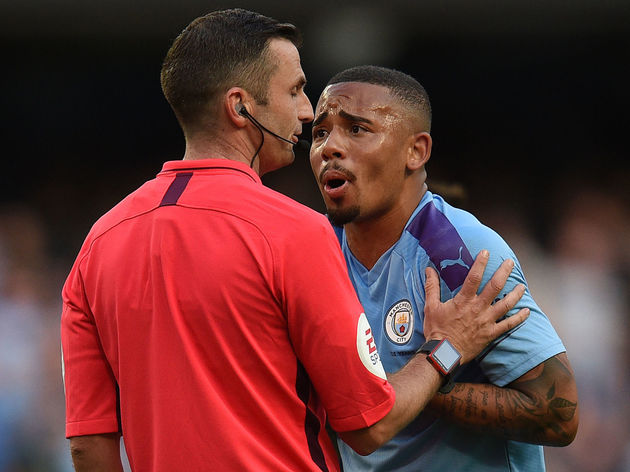 Guardiola was left with a painful sensation of deja vu, as his celebrations were cut short thanks to an extremely harsh call against his team.

VAR's introduction into the Premier League is bound to cause controversies, but it will take time before it is truly implemented correctly.

STAR MAN - It's almost unthinkable that ​Kevin D​e Bruyne was missing for almost all of last season, yet Guardiola's side still posted 98 points and won their second successive title.

It's frightening to think how good they could have been, had they have benefitted from the joyous talent of their Belgian international in the heart of the midfield. The City captain ran the show during the first half, laying on two wonderful assists for his teammates - who must worship his passing ability.

His vision and pinpoint precision makes him almost impossible to predict or defend against, and if he remains fully fit this year, it's hard to see any side other than City from lifting the Premier League trophy in May.

Raheem Sterling has scored in four consecutive club appearances in all competitions for the first time in his professional career, netting seven goals in those four games.

Imagine having KDB, B.Silva, Aguero and Sterling in your front 4 setup. Like what even is this city team mannnnn. 2-1 now: https://t.co/qedHQbmPbm pic.twitter.com/VjSN2tF4xp 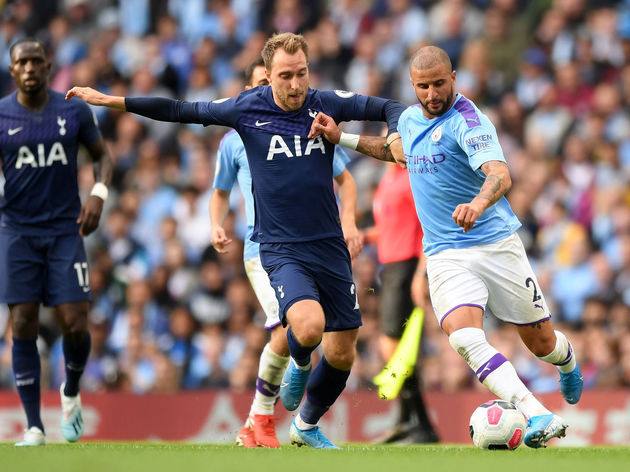 STAR MAN - Tanguy Ndombele was a rock in the centre of the pitch for Spurs, as he made vital tackles and interceptions time and time again. The Frenchman's awareness on and off the ball is very impressive, and he shielded his backline expertly against City. His ability to break up play, and set off counter attacks is a priceless skill for Pochettino, and in the final half an hour he was the stand-out man in the Spurs side, who held their own excellently against the Citizens.

Tanguy Ndombele strutting around out there and telling his team-mates to calm down in possession. He's a man who knows how to play against Manchester City. They should listen.

After today’s disappointing result, Pep Guardiola will be determined to see a positive reaction from his players, as they travel to the south coast to take on ​Bournemouth.

Mauricio Pochettino will be delighted with his team’s performance against the Premier League champions, and his players will be confident mood when they take on ​Newcastle United at the Tottenham Hotspur Stadium on Sunday afternoon.