A ​stunning hat-trick from Norwich striker Teemu Pukki fired his side to a crucial 3-1 win over Newcastle at Carrow Road.

The Finnish striker, who also scored on the opening day of the season against Liverpool, was superb once more as Daniel Farke's side picked up their first points of the season with a scintillating performance against a lacklustre Magpies. Pukki opened the scoring just after half the hour, thundering home a volley after a weak clearing header from Newcastle's captain Jamaal Lascelles. He then doubled his tally just past the hour, before he ensured the match ball would be his after sliding home Todd Cantwell's perfectly weighted through ball.

Newcastle rallied to pull back a late consolation thanks to a well taken goal from Jonjo Shelvey, but the visitors were well beaten in truth - and will head back to the north East sweating over the fitness of Joelinton, who was taken off with a hip problem in the second half.

After the way things unravelled at Anfield, there was much talk about whether Norwich's brazen style of play could thrive at Premier League level.

Football purists will be delighted to know it certainly worked today, with quick, ambitious passing befuddling the Toon defence and giving the Canaries a number of openings. 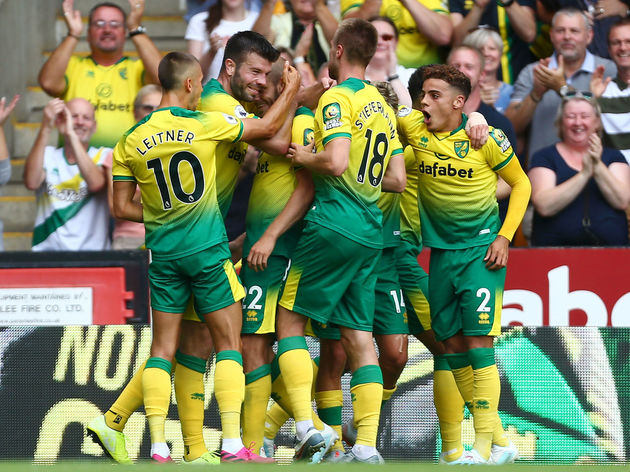 Pukki's wonderful finishing complimented the dazzling and at times near telepathic build up play provided by Marco Stiepermann and Ben Godfrey, with Moritz Leitner conducting things from midfield.

While Newcastle's attack is hardly the most formidable in the league, they also managed to keep things fairly steady at the back. Joelinton's chance aside, Godfrey and Grant Hanley reigned supreme and rarely was the home defence troubled.

Any doubts about whether Norwich's main man can cut it at this level have surely now been vanquished. Four goals in two games demonstrate not just his goal-scoring ability, but his canny skill in finding space and spinning away from defenders.

In the box he is deadly and as long as Norwich keep supplying him with chances, they will score goals this season. He notched 30 goals in all competitions last season and there must be a small part of him, while being serenaded in the home dressing room, wondering if he can match or even better that total after the start he has had.

3 - Teemu Pukki is the first player to score a @premierleague hat-trick for Norwich City since Efan Ekoku against Everton in September 1993. Magic. pic.twitter.com/G1BEHe6qBx

Norwich has a better attack than United and Chelsea loooooool

Pukki has a hat-trick. Great Finnishing.

It's little exaggeration to say Steve Bruce has a plethora of problems on his plate. Top of that list will surely have to be the tepid performance of Joelinton - he went off injured in the second half - who has done little in his first two games to explain the £40m Newcastle parted with to gain his signature. 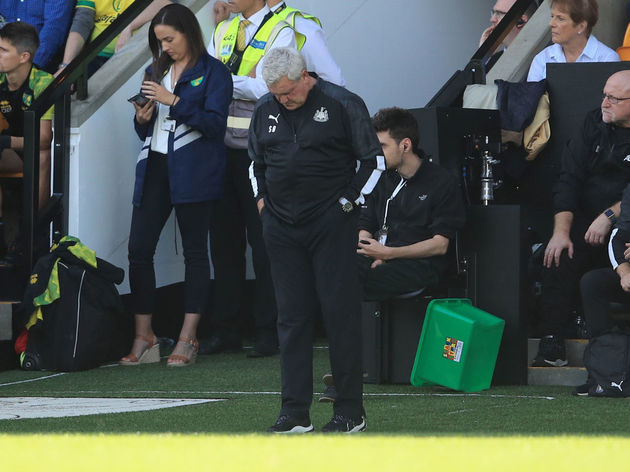 He should have scored in the first half - Isaac Hayden's superb cross put it on a plate for the Brazillian who contrived to miss the target from eight yards.

But it was one of few chances the Magpies managed to conjure up. Miguel Almiron looks a different player than the playmaker who thrived under Rafa Benitez, Emil Kraft's flaws were on full display in a difficult afternoon and the three man defence that looked so solid under Bruce's predecessor were carved open throughout the game.

Bruce has a lot of thinking to do but can take some pride in the battling performance of Hayden and the shot-stopping abilities of Dubravka.

The scoreline could have conceivably been worse but Martin Dubravka's goalkeeping kept things fairly respectable at least.

The Slovakian has been linked with a move away to St James' Park, with Real Madrid and Juventus surprisingly mentioned as potential suitors, but there's no doubt that fans will be keen to see him stay put.

Feel like our only good players now are Maximin, Hayden, Dubravka, Shelvey and Longstaff

Hayden and dubravka look the only ones interested out there !

Would of been 6 if it wasn’t for Dubravka

Alert to danger, a good shot-stopper and generally calm with his distribution, Dubravka's performance can at least offer comfort that the goalkeeping department is being well looked after - that's if you overlook a couple of errors, notably for Pukki's third where he seemingly was unsure of where his post was.

Norwich will be full of hope after this result and performance and return to Carrow Road next Saturday afternoon as they host Chelsea.

After two defeats for Newcastle, one of the last teams they will want to meet is Tottenham. Nevertheless, the Magpies will welcome Mauricio Pochettino's side to St James' Park next Sunday as the search for their first points of the season continues.