Wolves: The XI That Should Start Against Manchester United

​Wolverhampton Wanderers commenced their Premier League 2019/20 campaign with a 0-0 draw against Leicester City last weekend, but Nuno Espirito Santo's men can be pleased with how they've got the ball rolling in this season's Europa League.

It's been a strong start to the season to say the least for Wanderers, who most recently eased past...*checks notes*... FC Pyunik 8-0 on aggregate.

As a result, Nuno's men will now take on Torino in the next stage of qualifying - and the players will be relishing the opportunity. Before all of that, though, ​Wolves welcome Manchester United to Molineux on Monday evening, with both sides keen to get their Premier League campaigns off to strong starts.

Nuno has a number of options to choose from - and could opt to give full debuts to Patrick Cutrone, Jesus Vallejo and Pedro Neto. With decisions to be made, here's how he should line his side up.

Good game yesterday! To the next round! Thank you to all the fans for the support at Molineux! pic.twitter.com/Dar44mv880

Rui Patricio (GK) - Patricio was one of the players to be rested on Thursday, but he's the first choice shot-stopper and will come into the team to face United. He's a world-class keeper and he may need to be on top form to keep out a lethal Red Devils attack.

Matt Doherty (RWB) - Doherty had an outstanding 2018/19 season, picking up four goals and five assists in the league from his right wing-back role. Doherty faces competition from Adama Traore for the starting role, but Nuno should see no reason in dropping one of his standout players from last term.

Jesus Vallejo (CB) - Vallejo arrived on loan from Real Madrid in the summer, and has settled in very quickly. Although it would be a risk to change a back three that has proven to be so effective, the Spaniard can bring more to the role than Ryan Bennett. He showed this on Thursday with his wonderful ball to Patrick Cutrone, who laid it off to Pedro Neto to fire home.

Conor Coady (CB) - The captain is the heartbeat of Nuno's side, as proven by the fact he was one of the few first-team members to start on Thursday. He was also immense the last time United came to Molineux. Willy Boly (CB) - Boly is in a similar situation to Coady. Vallejo was brought in to challenge Bennett for the centre back slot on the right hand side, but Boly has been outstanding in his work for ​Wolves. His aerial prowess in both boxes will also be an asset for Wolves on Monday.

Jonny (LWB) - Jonny's work often goes unnoticed due to the vast array of talent on show in the midfield and upfront. However, he is a fantastic outlet, constantly showing for the ball and trying to make things happen. He will soon face competition from the young Ruben Vinagre, but Jonny should claim the spot against United. 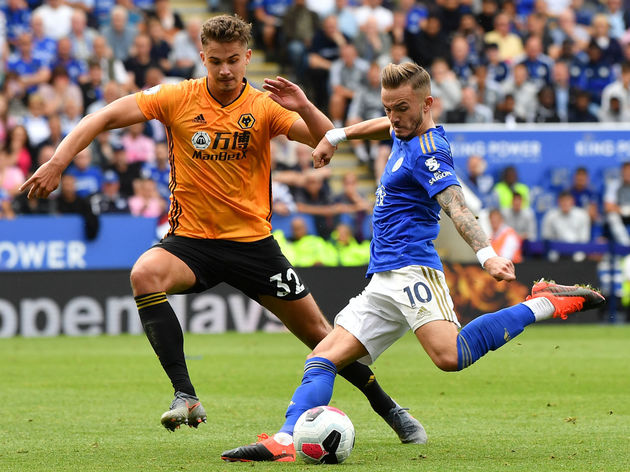 Leander Dendoncker (CM) - Dendoncker came in late in the summer of 2018, and little attention was paid. He started slowly, but has since become a key member for Nuno and was signed permanently this summer. His height, physicality, and passing are all attributes that can pose a threat to any side, including United.

Joao Moutinho (CM) - Moutinho is simply world class. He has become a fans favourite since his move, and has produced some breathtaking performances. He was taken off on 52 minutes against FC Pyunik on Thursday, presumably to rest him for the upcoming game. Moutinho pulled the strings the last two times United travelled to Molineux, and Wanderers will be hoping he can do the same again.

Ruben Neves (CM) - Wolves fans should be delighted with the club's summer transfers. They have made four excellent signings, and have been able to hold on to their star men. Neves is critical to Wolves, with both his defensive and offensive work. Both will be required Monday, but the Portuguese just needs the one opportunity to carve a team open. Diogo Jota (ST) - The 22-year-old came off the bench on Thursday to score a truly ridiculous goal. New signing Patrick Cutrone put in an impressive display on his full debut, as did Pedro Neto, but Jota showcased his talents not long after entering the fray. He should get the nod, at least for this game anyway.

Raul Jimenez (ST) - The permanent acquisition of Jimenez is the best piece of business Wolves could have done in the summer. The Mexican was top goalscorer last season, but it was his tireless work ethic and link up play with Jota that was so refreshing to see.