Daniel James made quite the impression on his competitive debut for Manchester United last weekend - scoring within minutes of coming on as a substitute in the 4-0 win over Chelsea.

The Welsh winger has proven a hugely popular figure at Old Trafford since his arrival from Swansea in June. After impressing on the club's pre-season tour and settling in quickly with his new teammates, there's high hopes among fans, within the team, and from manager Ole Gunnar Solskjaer that the 21-year-old will be a big success in the years to come. 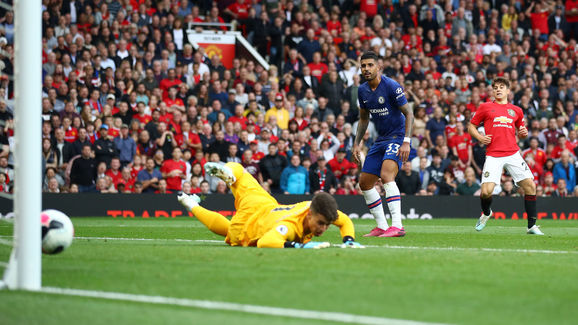 It could, however, have been so different.

Amazon Prime's new documentary, 'Take Us Home - Leeds United' dropped on Friday, and the six-part series goes in depth at one of the 13-time Premier League champions' biggest rivals.

*NOTE - THE BELOW CONTAINS SPOILERS, SO READ ON AT YOUR OWN RISK*

Want to see for yourself? Watch Take Us Home on Amazon Prime Video - available now

Leeds currently find themselves in England's second tier, the ​Championship, and the documentary shows exactly what went on at the club through the entirety of last season - where they agonisingly missed out on promotion back to the Premier League despite being in promotion contention for the duration of the season. Leeds were defeated in the play-off semi-final by Derby County.

The documentary looks at what happens behind the scenes, following director of football Victor Orta, CEO Angus Kinnear and owner Andrea Radrizzani as they try to steer the club back to the top flight for the first time in 15 years. Yes, there's even a look at Spygate, and an opportunity to understand how in the heck Marcelo Bielsa's brain works. One part of the doc, however, focuses on James, and how close he came to signing for Leeds from ​Swansea in the final days of the January transfer window. The two clubs had agreed a deal worth up to £7m, narrator Russell Crowe (yes, that one) explains, allowing James to travel to the club's training ground, Thorp Arch, to undergo a medical.

Positive discussions had taken place between the two clubs to allow the deal to reach that point, with with Kinnear explaining: "[He was] identified very early. Marcelo really liked him and Victor really liked him. We felt he could bring something different to the team.

"We were very conscious that anything we did in January had to have an impact on what we did that season and we thought he was that impact player.

"I trust Victor implicitly, and he says he can make the difference."

Orta himself is seen as the main man trying to get the deal over the line - as expected, given his role as director of football - and he reveals that the club had considered the stage as the final part of negotiations. He does admit it's tricky to finalise however, having to reach full agreement between five parties: the player, his entourage, his agent, the selling club and the buying club.

James arrives, is seen selecting his squad number (21, the one he wears in Manchester) and being run through the medical process. He passes with ease before going to Elland Road to finalise the transfer, though Orta continues to wait on Swansea. It runs into the final hours and minutes, as numerous people from Leeds vent their frustration at having their calls ignored by then Swansea chairman Huw Jenkins.

​Leeds right back Luke Ayling features throughout the series, and adds in the players' perspective amid the uncertainty - revealing the players were searching for updates from the people in the know in their group chat. He was later assured the club were "just waiting for a phone call to sign off on it, it's all done". But the phone call never came.

James had signed his deal to save time as the deadline approached, with just one final document to sign (the one Swansea needed to sign off on) before the deal could be confirmed. He was even seen signing paperwork and holding up the club's shirt, with his name and number on the back.

'Take Us Home: Leeds United' is available on Amazon Prime from today.

Here's how close #MUFC's Daniel James came to signing for them.

The deadline passed, however, without Swansea's confirmation.

James cut a frustrated figure, saying on a phone call "I've been here all day and everything's done, man, they just won't sign", while Angus Kinnear describes Leeds as an "unwitting victim of boardroom politics on Swansea's end" - explaining that he's never found himself in such a situation before.

James, unable to complete his deal, returns to Swansea to complete the season in the Championship. Though the situation for everyone - ​Manchester United, Swansea City and Daniel James - everyone bar Leeds United, now seem pretty happy with how the situation turned out.