Every footballer dreams of lifting the trophy, but there are some league records that no player or club want to hold. However, someone has to do it. Everton have been ever present in the Premier League, but this impressive feat does leave them vulnerable to some unwanted records. As it stands, the Toffees have scored the most own goals in the league’s history, with 50 netted across the 28 seasons they have spent at the top of English football.

Richard Dunne holds the record for the most league own goals scored by a single player (10), while two players share the title for most own goals in a season. Martin Skrtel and Lewis Dunk both scored four times passed their own keepers during the 2013/14 and 2017/18 seasons respectively. 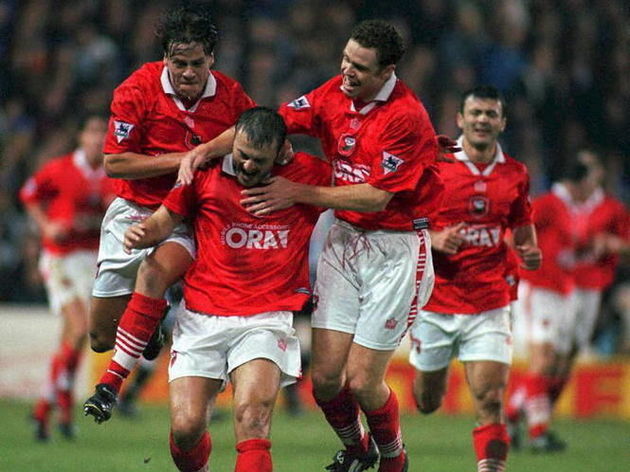 Derby County, unfortunately, feature heavily on the honours board of bad, bad things - with their 2007/08 campaign currently the worst on record in terms of goalscoring. In that season, they netted Ah, another title for Derby to add to their unwanted trophy cabinet.

Sadly, in that aforementioned disaster of a campaign, the Rams conceded 89 goals in their 38 games played. They don't top the tree, though, as Swindon Town take that momentous honour - conceding 100 goals in the 1993/94 campaign, before the season was reduced from 42 matches to 38.

Everton have conceded the most goals in the league's history, 1,313, which is just four in front of Tottenham - who for once, at the time of scribbling, won't mind finishing as runners-up.

4. Fewest Points in a Season Well we may as well just go ahead and get on with it, because Derby do have another record they really wish they didn't. Just 11 points were scooped during, you guessed it, the 2007/08 season, solidifying that Rams side as the worst in Premier League history.

What's the opposite of invincible? Because whatever word you come up with, that will be an accurate description of Paul Jewell's side, sadly. The Rams get to share this dreadful record of 29 top division losses with Sunderland, who achieved the same magnificent feat during the 2005/06 campaign. Huddersfield thought about joining the pair last season, but pulled up shy with 28 defeats last season.

West Ham’s defeat to Manchester City during the opening weekend drew them level with Everton for the record of most defeats in the league's history, though their 365 defeats have come in four fewer seasons than the Toffees' total.

Fortunately, for the Hammers at least, Everton were keen to take this one back on their shoulders - and their loss against Aston Villa in week 3 of the 2019/20 season has done just that.

6. All Three Promoted Clubs Being Relegated in a Season This achievement, startlingly, has only occurred once in the Premier League.

The 1997/98 season is the only time that all three new boys have gone down - when newly promoted Barnsley, Bolton Wanderers and Crystal Palace immediately returned to the second tier of English football. Crystal Palace, Middlesbrough, Norwich, Sunderland and West Bromwich Albion have all been relegated four times from the Premier League.

The Baggies were the most recent members of this illustrious club to add to their tally, after suffering the dreaded drop during the 2017/18 campaign. Palace Seven players share the record for most red cards picked up during a single season. Hardmen Vinnie

Richard Dunne has another unwanted personal record as his total of eight red cards puts him alongside Duncan Ferguson and Patrick Vieira as one of the league's baddest ever boys.

9. Most Appearances Without Scoring (Excluding Goalkeepers)