But as much as United’s devastating counter attacking was a key part of the statement victory, the defensive resilience on show was also very important looking ahead to the long-term. New £80m centre-back Harry Maguire was named Man of the Match for his impressive performance, showing no signs of wilting under the pressure of his price tag. Fellow debutant Aaron Wan-Bissaka also impressed as part of a new-look back five.

The emergence of Victor Lindelof was a rare highlight of last season. The Swede and Maguire look made for each other in the centre of defence, with Luke Shaw and goalkeeper David de Gea, on the verge of signing a new contract thought to be for six years, completing the unit.

Fitness permitting, that back five should start almost every game this season. And as they play together more and more, they should only get better and better.

This is hugely significant for United because there has been no ‘first choice’ defence for years. 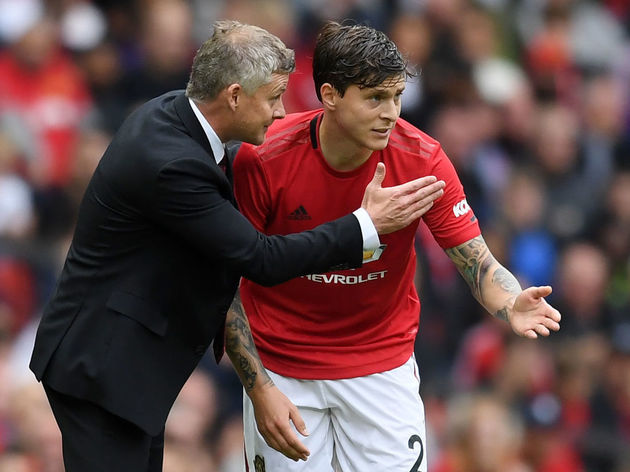 Particularly where centre-backs were concerned, it was often said that former manager Jose Mourinho didn’t know what his best defence was. Lindelof, Chris Smalling, Phil Jones, Eric Bailly and Marcos Rojo all played under the Portuguese, but injuries and poor form prevented any single pair from emerging. Even Ander Herrera and Scott McTominay played in defence.

Louis van Gaal had similar problems at first. The Dutchman then found a centre-back pairing he liked by often using Daley Blind alongside Smalling – United had the joint best defensive record in the Premier League in 2015/16, but Van Gaal was sacked and Blind moved to the fringes.

David Moyes, meanwhile, was left trying to blend old with new during his ill-fated 10 months in charge. Rio Ferdinand and Nemanja Vidic were still at the club during the 2013/14 season alongside Smalling, Jones and Jonny Evans, but no single centre-back played more than 26 league games.

Full-backs have proved a problem for every United manager since Sir Alex Ferguson retired. Looking at last season in isolation, United named an unchanged defence on just seven occasions over the course of the whole 38-game Premier League season. There were as many as 24 unique defensive lineups from United in the Premier League, with 20 of those 24 combinations used in just a single game, and therefore only four used more than once.

The most frequently seen United defence appeared in eight of 38 games and saw Ashley Young, Chris Smalling, Victor Lindelof and Luke Shaw line up in front of David de Gea.

Having such an endlessly rotating back four no doubt contributed to the team leaking 54 goals in 38 games, an unwanted club record in the Premier League era. De Gea also saw his form plummet, which, again, is unlikely to have been helped by the revolving door in front of him. That United now have a back four and goalkeeper that could potentially pick itself for the season, and equally stay together for literal years as part of the bigger picture, is a long overdue relief. The key to defensive resiliency is stability and familiarity.

At the start of a fresh chapter for the club, it is something that Solskjaer now has at his fingertips.