Giovanni Trapattoni: A Career of 2 Halves That Defined the Golden Era of Calcio at Juventus

Giovanni Trapattoni is number 5 in 90min's Top 50 Great Managers of All Time series. Follow the rest of the series over the course of the next week.

That's how the final years of Giovanni Trappatoni's managerial career are remembered.

Five years of a self-defeating style of football that slowly, but surely, turned a large group of supporters away from their national team. So much so, that when the FAI released the statement:

"The Football Association of Ireland, Giovanni Trapattoni and Marco Tardelli today (September 11) announced that following an amicable meeting this morning, they have parted company by mutual consent."

People in Derry shouted: "Glad to see the back of him, hi!"

People in Dublin shouted: "Ak sure he was feckin' useless anyway!"

The lean years of not beating a single team ranked higher in the FIFA rankings, being thumped 6-1 by Germany, and having to deal with the fact that the national team manager thought every footballer in the country was sh*t, had ended. ...All of the above isn't exactly top 50 greatest managers of all time material, eh?

Giovanni Trappatoni's final five years as a manager aren't exactly fondly remembered. In fact, neither are the 15-odd years before that.

The Italian manager didn't exactly set the world on fire during spells at Bayern Munich, the Italian national team, the Vatican City (yeah, they have a team, and no, Father Romeo Sensini from Father Ted doesn't play for them), Benfica, VfB Stuttgart, Fiorentina, Cagliari & Red Bull Salzburg.

The only really memorable moment of this period was Trap's rant to the German media following backlash over his decision to drop two of Bayern's best players for a game against Schalke 04 (which they inevitably lost). Here it is in all its broken German glory:

So, yeah, the last 20 years of Trap's managerial career were pretty, well, meh.

But the Italian's career is one of two starkly contrasting halves.

What came before, in the first half of his career, was truly special.

For the first half of his career was an 18-year period during which Giovanni Trapattoni assembled one of the greatest teams of all time, won the most trophies in Italian football history, and dominated BY FAR the best league the world has ever seen.

Following a hugely successful career at the heart of a two-time European Cup winning AC Milan side (led by Nereo Rocco, who you can read more about ​here), and a less successful managerial baptism at the same club, Trapattoni took over at a surprisingly struggling Juventus in 1976. Juventus weren't 'struggling' because the squad was devoid of talent, or needed a total upheaval from top to bottom.

They turned to Trap.

And within a year, it was clear that this was an inspired appointment.

As within a year, Juventus had ousted inner-city rivals Torino by a single point, and claimed their 17th Scudetto.

Trapattoni's Bianconeri would then round off the 70s with another Scudetto and a Coppa Italia.

The real Juventus were back. Back atop Serie A. Back with the big boys of European football. Back in the big time. And they were back

But Trapattoni's influence, while clear in a man-management Brendan Rodgers x2000000 sense, wasn't wholly evident tactically, as he hadn't really deviated too far from the catenaccio utilised by Carlo Parola previously. Sure, Trapattoni had focused more on space and the exploitation of said space, but the remnants of catenaccio were still prevalent in each and every game Juventus played in the late 70s.

It wasn't until the signing of Republic of Ireland hero Liam Brady - later a part of his Irish coaching set-up - from Arsenal in 1980, that Il Trap began to assert himself more in a tactical sense.

Having one of the most gifted creative talents in world football opened up the opportunity to utilise new systems; and the system that Trap would settle on, would be Gioco All'italiana.

Here's a Oxford/Cambridge/wherever else you can get dictionaries, description:

Gioco All-italiana (noun) - A tactical system in which each player outfield player - except the trequartista - would have their zone to occupy on the pitch, rarely - if ever - meandering out of position, while the trequartista would have the freedom, as the player capable of creating something from nothing, to roam around the park, finding pockets of space to exploit and break down the opposition's defence.

The use of Gioco All-italiana would come to define the rest of Trapattoni's career.

In using this formation, Trap had invariably (maybe accidentally), pinned all of his hopes for success on world class number tens.

In the two years utilising Gioco All'italiana with Brady as the trequartista, Juventus won. A lot. Two Serie A titles in two years to be exact; the second of which was won by a Liam Brady penalty on the last day of the season to pip Fiorentina to the post.

Unbelievably, however, there was still room for improvement.

For Juventus, despite all the success and trophies, and medals, and certificate of achievements, hadn't quite won everything. They'd won a lot; but not everything. 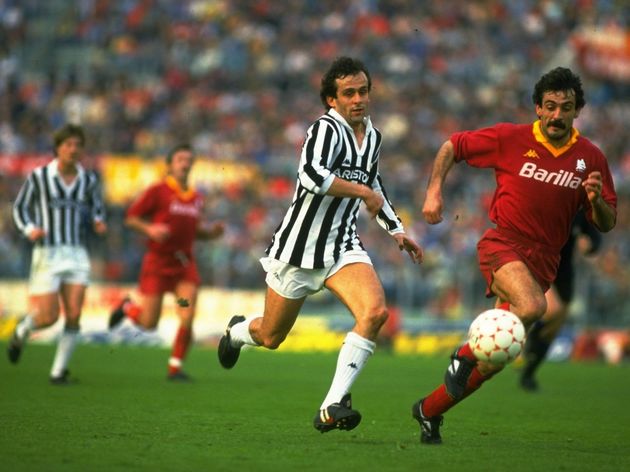 So in order to win everything, rather than another tactical upheaval, Trap expressed the need for more talent. An even better number ten.

And he got it.

Liam Brady, explicitly the best player at the club at the time, was ousted in favour of Michel Platini; a French trequartista with a number nine's eye for goal and the passing ability of...Jesus Christ himself.

As the number ten improved, so did Juventus.

"Trapattoni told me that I was free to do what I wanted."

Their maiden European Cup triumph would allude Trapattoni and Platini until 1985 when it would be won on the saddest day in La Vecchia Signora's history, as 39 Juventini were tragically killed prior to kick-off at Heysel Stadium. In the aftermath of the tragedy, what should have been Trapattoni's crowning achievement paled into irrelevancy, becoming a day remembered for unspeakable pain as opposed to unbridled joy. 1986 would be the legendary manager's final year at Juventus - for the time being - capping off a remarkable decade with his sixth Serie A title.

After leaving Juve, Trapattoni would enjoy a relatively successful spell at Inter, winning the 1989 Serie A title, but without a genuinely world class number ten, the

If Giovanni Trapattoni's managerial career had ended the moment Il Divin Codino lifted the UEFA Cup trophy above his head, Trap might be even higher in our list of greatest managers of all time. But, as you know, it didn't.

Il Trap would go on to manage for the guts of another 20 years, winning infrequently and never having the opportunity to manage world class number tens at club level ever again.

Still, that shouldn't detract from the fact that the first half of his career in management was remarkable. Truly remarkable.

He dominated in a way no other manager has ever done in the most undeniably competitive league the world has ever seen.

That ain't half bad, eh?

Number 6: ​Johan Cruyff: The Visionary Who Became the Most Important Man in the History of Football