Johan Cruyff: The Visionary Who Became the Most Important Man in the History of Football

Johan Cruyff is number 6 in 90min's Top 50 Great Managers of All Time series. Follow the rest of the series over the course of the next week.

As a player, Cruyff is the among the ​very best of all time.

At Ajax he won 17 major trophies, including three consecutive European Cups. Individually, he collected three Ballon d'Or awards, the last in 1974 as he starred for the Netherlands at summer's World Cup when the 'Total Football' born in Amsterdam went global. His 1973 transfer to Barcelona was for a world record fee and he continued to win trophies in Spain. A glitzy spell in the United States followed, before a second spell at Ajax in the early 1980s, and a final season with rivals Feyenoord, whom he inspired to domestic glory.

He became Ajax coach in 1985 and moved on to Barcelona in 1988, overseeing the 'Dream Team' era that yielded four consecutive La Liga titles in the early 1990s and the club's first ever European Cup.

Cruyff was a contemporary of both Pele and Diego Maradona during his playing career, while he managed at a time when Arrigo Sacchi, Fabio Capello and Franz Beckenbauer enjoyed great success. Yet his overall reach extends far further than any of them.

For Cruyff's lasting legacy that will continue to influence countless future generations is arguably more important than the great successes he achieved himself as a player or manager alone.

Cruyff was guided throughout his playing career by the great Rinus Michels, working together at Ajax, Barcelona, Los Angeles Aztecs and at the 1974 World Cup. It was Michels who is credited with developing the 'Total Football' model that focused on fluidity and built on the success of the Austrian 'Wunderteam' of the 1930s and Hungary's 'Magical Magyars' of the 1950s, with Cruyff and 'Total Football' in turn influencing the eventual establishment of 'Tiki-taka' at Barcelona.

Upon taking over as Ajax coach in 1985, Cruyff was immediately a success. He didn't claim an Eredivise title, but two KNVB Cups in two years were also accompanied by the UEFA Cup Winners' Cup in 1986/87, the club's first European trophy since Cruyff himself was a player. When he arrived back at Barcelona in 1988, a decade after leaving as a player, Cruyff was tasked with an enormous rebuilding job. The club was at its lowest ebb, beset by debt, poor results, worse performances and a toxic atmosphere. But the Dutch master, by this point still just 41 years of age, was able to completely transform Barça within a few years and create lasting change that serves the club to this day and will continue to do for generations to come.

Returning to what he had known as a player and as a continuation of his work at Ajax, Cruyff overhauled Barcelona's whole tactical system. But his changes went far beyond simply coaching the first team, implementing a club-wide model that ensured players at every level were drilled in the same skills, techniques and way of playing.

The young talents were there to be moulded because of Cruyff himself. He is credited as the father of the club's famed La Masia academy, first pitching the idea of a copy of the Ajax youth setup he had known back home to then president Josep Nunez in 1979. By the time Cruyff returned in 1988, the fruits of the system were emerging and he could further develop the talent.

Pep Guardiola is the most famous of the local players he nurtured. Legend has it that Cruyff saw a 17-year-old Guardiola playing on the right side of midfield for the youth team in his very week as coach in 1988 and instantly insisted the youngster move into a central role. Four years later in 1992, a 21-year-old Guardiola played there as Barcelona won a first ever European Cup.

By the time Barcelona were crowned European champions in 1992, goalkeeper Andoni Zubizarreta and veteran defender Jose Ramon Alexanko were the only survivors pre-1988.

Early success had come in the form of UEFA Cup Winners' Cup in 1989 and a Copa del Rey in 1990. Barcelona dominated Spanish football in the early 1990s, winning four straight La Liga titles between 1990 and 1994. The 'Dream Team' also returned to Europe's showpiece event in 1994 when they faced AC Milan in the newly rebranded UEFA Champions League final. The 4-0 loss that night Athens remains one of the all-time great shocks in European club football. 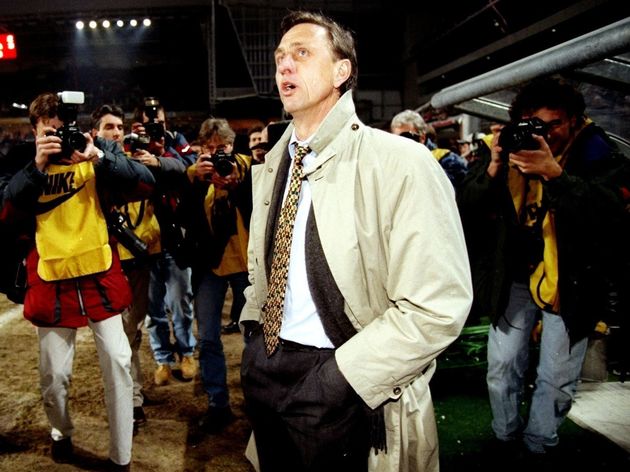 "Without him I wouldn't be here," Guardiola, himself now one of the all-time great managers, said of Cruyff in an interview with The Guardian in 2016.

"Before he came we didn't have a cathedral of football, this beautiful church, at Barcelona. We needed something new. And now it is something that has lasted. It was built by one man, by Johan Cruyff, stone by stone. That's why he was special."

Cruyff's one regret was that he was never able to manage at international, considering it the only thing missing. He did lead the Catalan national team for its exhibition games between 2009 and 2013, but he missed out on the opportunity to lead the Netherlands at the 1990 World Cup.

The Dutch were reigning European champions at the time and Cruyff himself acknowledged in his 2016 book 'My Turn' that he 'expected' to be appointed. He had even nurtured star players Ronald Koeman, Marco van Basten, Frank Rijkaard as Ajax coach and was a teammate of a young Ruud Gullit at Feyenoord. But Michels, then serving on the technical board, inexplicably overlooked him.

With Barcelona's 'Dream Team' era at an end, Cruyff was only 49 years of age when he permanently left full time management in 1996. yet his influence was not over. He went on to create the 'Johan Cruyff Institute' to educate athletes and business professionals in sports management, while, his 'Cruyff Courts' have provided invaluable opportunities for young players from all over the world to play the game they love. In 'Barcelona: The Making of the Greatest Team in the World', Spanish football writer Graham Hunter stated Cruyff is "...pound for pound, the most important man in the history of football."

There isn't really a better final sentence to describe the visionary that was Johan Cruyff.